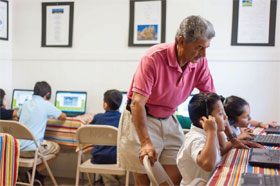 His mission is simple. “Kids are in school 180 days a year, 6 hours a day. How do we capture the rest of their time so they do not forget  what they are taught in school?”

NOC’s supplementary classes are planned for summers, after school hours, and soon, Sharma hopes, on the weekends. 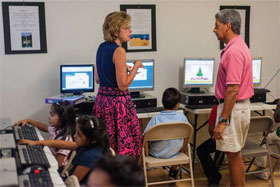 Sharma has learned from his 30-plus years at the World Bank.

By “top down” he meant that the World Bank told countries what they needed.

“Here, we start from the bottom and involve the community,” he said.

Sharma’s program gets results by setting up programs inside the community, rather than requiring students to travel to visit tutors and doctors. Children get off the school bus and walk into a townhouse that has been transformed to a classroom, complete with computers and individualized curricula. The Beaufort Memorial Mobile Health Bus visits twice a year. Even the librarians come to call.

NOC also sponsors community projects such as building a playground and a soccer field, with NOC providing the materials and the parents donating the labor. There are English classes for Hispanic parents who do not speak English.

NOC’s annual budget for programs in education, health care, and workforce development, as well as social events, is about $225,000. The program helps approximately 200 students annually. Education is NOC’s flagship program and accounts for about 70 percent of its budget.

Families in the Oaks on Hilton Head and in Bluffton have the typical disadvantages of low-income families, including single parent families, parents who don’t speak English, and crime.

The digital divide is alive and well. Teachers cannot expect children to do homework on the computer if there is no computer in the home. Online resources such as the Khan Academy, which could help children with math, are not accessible without a computer. 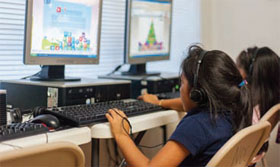 NOC’s solution is to set up classrooms in the neighborhoods, and bring the computers and the teachers for after-school and summer programs, supplemented by carefully-selected and trained volunteers from high schools who want to do community service.

Each neighborhood has a paid program manager, and a paid liaison. Community leaders within the communities are unpaid and help out with the programs. Parents help keep costs low by cleaning the classrooms and building playgrounds and soccer fields with materials donated or purchased at low prices.

Children come four days a week for two hours. They remove their shoes so they do not track dirt into the classrooms. After a light snack of fruit and juice (NOC is trying to teach them about nutrition, and stays away from sugary and salty snacks) they spend an hour working on homework, and an hour on remedial instruction.

Each classroom has plastic tables and folding chairs. One classroom has banks of desktop computers, which, Sharma explained, were in the process of being upgraded. Two others have large metal safes where laptops charge overnight in preparation for the next day’s class.

On a table sits a jar full of raffle tickets. Any child who scores above 80 percent in an assignment gets a ticket to put in the jar, with the chance of winning a bicycle donated by a local store. Bicycles are popular so the children work hard.

In order to get unbiased results of students’ progress, NOC leaves it to the schools to perform the testing. Tests show that NOC gets results. Students who took the summer learning programs in 2012 performed better on math and reading tests than the average of all Beaufort County students. During the academic year 2012-2013, NOC students regularly exceeded national averages.

The program has spillover effects in terms of a steadily diminishing crime rate. The Beaufort County Sheriff’s Office reported 82 offenses in the Oaks in 2009, when the program started. By 2012, offenses fell to 55.

Locating services in neighborhoods where they can be more easily accessed by residents might seem obvious, but it is not easy. The low-income apartment complex in Bluffton where NOC has provided health and education services for the past three years was sold in May to Aspen Square Management, and NOC is losing the two rent-free units it uses for classroom space. Aspen Square wants NOC to pay $1,000 per month each, plus refurbishment costs, out of Sharma’s price range. NOC’s program in Bluffton is now uncertain.

It might not be possible to replicate NOC’s results in every community. But NOC’s results are difficult to ignore. Many communities would envy lower crime and better educational scores. They were gained not by largescale government programs and bureaucracies but by low-cost programs, local volunteers, community involvement, and the vision of Narendra Sharma.

Diana Furchtgott-Roth is a contributing editor at RealClearMarkets, a senior fellow at the Manhattan Institute and a columnist for the Washington Examiner. This article was first published Aug. 20 on realclearmarkets.com.