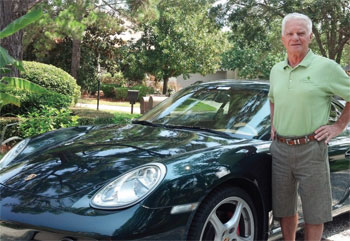 To discuss with Harlacher the massive undertaking of uprooting the festival and transplanting it is to get a clinic in time, motion, strategy, and details layered upon details in a Mandlebrot set of processes and procedures.

“What we did is, once we decided we were going to move, we set a strategy in place for the move where we would basically try to recreate the 2012 event for 2013 and do minimal changes in the way we ran the event so the moving parts were limited... We went through our whole process from recruitment to taking cars off on Sunday and we went through function by function, saying, ‘does this change does that change.’ Those that didn’t change we parked on the side. Those that had significant changes, we redesigned,” he said.

It’s a brief glimpse inside the mind of a man who viewed a monumental task and, with practiced ease, simply broke it into a series of logical functions and turned a single Herculean effort into a mere mountainous pile of serviceable tasks.

He talks about the challenges of parking, wrangling shuttle buses and the minutiae that it involves as if solving an SAT word problem (“The first challenge was parking and shuttling to the golf club. We had to redesign the way we do parking from partial shuttling to total shuttling, whether it’s scheduling shuttles, or routing to minimize transit time.”). Even the function of the move that most outsiders viewed as the most insurmountable, namely staging the Concours on the delicate landscaping of a golf course, sounds like nothing more than a child’s riddle when Harlacher describes it.

“We know for example that a Porsche has a clearance of, let’s say, seven inches, so we know we can only move them in certain areas. Some of the older cars have bigger clearance so we can take that into account. We have a lot of experience in that, land planning and moving these cars around trees, on and off of trailers. That part is well in hand.”

It’s simply a small matter of knowing the particular capabilities and measurements of hundreds of very expensive cars, and matching them up to inchby-inch terrain measurements of a giant golf course. To the layman, it’s a nightmare. To an engineer, it’s a worthy challenge.

That last part may be the bigger challenge. While the Harlacher plan has analyzed every step in the move across the road, the execution lies in a group of volunteers to whom Harlacher gives most of the credit. There’s retired Colonel John Cavedo, whose military genius helped refine many of Harlacher’s movements (“Nothing gets by him,” Harlacher said). There’s land planner Truitt Rabun, who mapped out the contours of the golf course against those hundreds of ground clearances. There’s Lindsey Harrell, whom Harlacher credits for myriad rock star moments, from acting as a liaison to the Sheriff’s Office to arranging shuttles. Then, of course, there are the hundreds of volunteers. As a guy who started out as volunteer class host, Harlacher has a special appreciation for their hard work.

“We have to bring to bear 25-30 volunteers along the backstage area safely and timely fashion. You’re putting 160-170 cars on Saturday morning and 155 more Sunday. It takes a lot of volunteers to keep all those things moving, to get cars through right gates,” he said.

It takes a lot of volunteers, but more importantly it takes a precise plan, a well-thought-out set of marching orders that makes his move possible. Fortunately, precise plans even in the face of overwhelming complexity, are Harlacher’s stock in trade. “They’re kind of logical if you think about it,” he said.