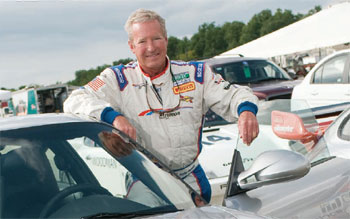 It was 1969, and Haywood had just met Peter Gregg — a racing legend in his own right — an encounter that would change the course of his life forever. The duo formed a team and Gregg ordered Haywood his first racecar — and even offered to teach him to drive it. The brand-new Porsche 911S arrived in Jacksonville on a boat, and Gregg and Haywood brought it to Savannah for a test drive at Roebling Road Raceway.

“After the first day, I was quicker than he was,” Haywood recalls. “It was just one of those things that clicked.”

With that, a legendary driver’s career was off to the races.

Haywood went on to win numerous races, including 10 wins in the events that make up endurance racing’s Triple Crown — the Rolex 24 Hours at Daytona, the 24 Hours of LeMans and the 12 Hours of Sebring — and was inducted into the Motorsports Hall of Fame of America in 2005.  Now Haywood’s resume brings him back to the area where he found his racing focus, as he serves as Honorary Chairman of the 2013 Hilton Head Island Motoring Festival & Concours d’Elegance.

During his 40-plus years in the sport, Haywood found himself behind the wheel of just about every kind of racecar, but he always found his way back to sports cars and endurance racing, something that came natural to him. So natural, in fact, that he won early in his career and within a decade had won the IMSA GT Championship twice — in 1971 and 1972 — and captured one of the most coveted titles in endurance racing at the Rolex 24 Hours at Daytona in 1977.

“It was something I adapted to really easily,” Haywood said. “One of the most important things in long-distance racing is you have to have the ability to change. You have so many different elements going on, and a lot of the time you have a car that’s not perfect. You have to adapt under the circumstances. The guys who are really locked into driving a certain way are generally not successful.”

The third of his record five wins at the Daytona 24 sticks in his memory because it also marked the longest he ever spent behind the wheel of a racecar — eight hours of “moving up the ladder and knocking off the competition one by one” because his co-drivers didn’t care for driving at night.

In addition to his five victories at Daytona, Haywood won the 24 Hours of LeMans three times — including his first start there in 1977 — and twice claimed the 12 Hours of Sebring. Two of his wins at Daytona and one at Sebring came with Gregg.

The relationship with Gregg, who died of an apparent suicide in 1980, kept Haywood behind the wheel of a Porsche for most of his career and set a course for his post-retirement life, as well. He is a vice president of Brumos Porsche in Jacksonville and chief driving instructor for the Porsche Sport Driving School and the Brumos Driving Experience.

Those connections to the sport have satiated him since his final race — in his 40th start at Daytona in 2012 — and enable him to get behind the wheel of a racecar on a regular basis. “It’s over a 40-year period of time, but it really seems like just yesterday,” Haywood said.

“I miss it. I would lie to tell you I don’t miss it. This is certainly a different chapter.”

A chapter in a book that might never have been written if not for a chance meeting with Gregg and a fateful test drive at Roebling Road.

“Peter saw something that he thought he could capitalize on and develop into something special, and he was right,” Haywood said. “Without him, I don’t think I would have ever accomplished the things I did.”