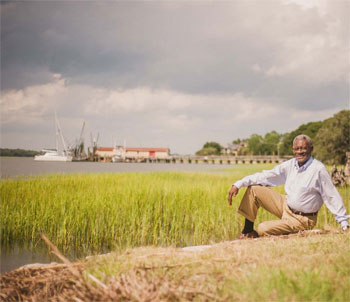 Barnwell, 78, who lives on Katie Miller Drive (named for his great grandmother who was a large landholder in the area), said the shrimpers organized the Hilton Head Fishing Cooperative, Inc., in 1966 and then went looking for a deep water site that would accommodate not only their boats but the marine railway they would build to pull them out of the water for repairs.

They purchased the property for it from Thomas and Mae Bryan, another African American family in the neighborhood.

“It was started as the result of the need for services for the local fishermen,” Barnwell said in recalling those days during an interview. “The services included diesel fuel, ice and net supplies to help make the operation efficient.”

“To be a member,” he added, “you had to have a shrimp boat.” Barnwell had two shrimp boats — the Lois Jane and the Pioneer.

Once the land was purchased, the co-op enlisted retired Col. Charles Akley, an engineer, to design the marine railway and storage for shrimp and fish.

Barnwell said production was good and the co-op met their quota in most years. In their peak year, they marketed 140,000 pounds of shrimp, he said.

Other shrimp boats would avail themselves of the co-op’s services, according to Barnwell. He said they came from St. Helena to Savannah.

Barnwell said the co-op’s boats would work as far south as Key West.

The president of the co-op was David Jones who became a major figure in a successful community protest, led by the fishermen, against plans of BASF to build a chemical plant at Victoria Bluff on the Colleton River in Bluffton. Barnwell told of how Jones went to Washington, D.C., aboard his shrimp trawler, Capt. Dave, in April 1970 to deliver petitions with 40,000 signatures to Secretary of the Interior Walter J. Hickel opposing the plant.

The shrimpers felt the plant would ruin the fishing industry by damaging the estuary and marine life and pollute the waters of Port Royal Sound.

BASF was seeking a permit to operate the plant — but never got it.

Jones, who served on the Beaufort County Council from 1967 to 1977, the first African American from Hilton Head Island and the third from the county to do so, died this past January at the age of 85.

At his wake, Barnwell spoke and extolled him as “a person who made conditions and life better for many persons in many ways.”

The co-op continued to operate until 1980 when it folded for a combination of reasons. Barnwell said five factors contributed to its demise.

First of all, he said, fuel prices started to go up rapidly.

Secondly, he said, the designated trawling areas by the beaches changed. “The boats kept getting pushed further out where there were no shrimp,” he said.

The third reason, Barnwell went on, was the turtle excluder had to be built into their nets so that a turtle could get out. “That results in a large percentage of shrimp getting out too,” he explained.

The fourth was related to the declining economics. Barnwell said the shrimpers in the co-op didn’t have the technical or financial expertise to do the analysis necessary to make adjustments both boat-side and in the market place.

Finally, he said, the fifth reason was the influx of Japanese shrimp to the market.

But Barnwell said they had a good run.

Having their own co-op and boats enabled members to increase their earnings over what they were being paid working on other shrimp boats.

“Being your own boss is a rewarding situation,” he smiled.

He said members of the co-op also enjoyed the support for each other.

“It was exciting for everyone,” Barnwell concluded in looking back, and noted “Some of them are still alive.”