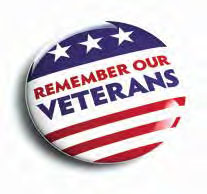 In honor of Veterans Day, Hilton Head Monthly highlights Arnold Rosen and Blaine Lotz — two men striving to make sure we never forget the sacrifices and service given by all veterans. 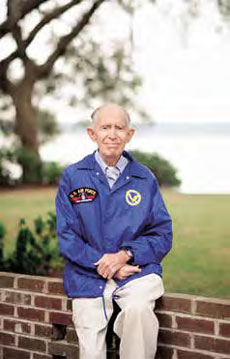 While Veteran’s Day is commemorated by most citizens once a year, to many veterans, it is a year-long, almost daily commitment. Arnold Rosen of Sun City is one of those Lowcountry veterans who spends nearly every day honoring veterans from the many wars he has seen in his lifetime. Rosen is the historian for the 500-strong Sun City Veteran’s Association and has written two books that feature profiles of 82 veterans. He served in the U.S. Air Force during the Korean War. “Many of our World War II veterans are passing away,’’ he said. “We need to do all we can to honor and recognize them for their sacrifices.’’

Rosen, who himself was named Sun City’s Veteran of the Year in 2011, features veteran’s profiles in two books “Keeping Memories Alive: Our Aging Veterans Tell Their Story” and “Before It’s Too Late.”

“I interview them in their homes, at assisted living residences and at nursing homes,’’ he said. “Their families often reach out to me. They all have a great story to tell and want to save it, and share these stories and articles with their children and grandchildren.’’

He said they almost always have detailed records of their missions and years of service.

He said one veteran he interviewed recently had a binder for each of his World War II air strikes, highlighting every mission detail in comprehensive form.

Rosen’s work isn’t limited to profile features and ceremonies on traditional holidays such as Memorial Day and Veterans Day.

He and his group organize many school programs for children featuring Sun City veterans as guest speakers.

They also participate in honor flights, which transport veterans expense free to Washington D.C. for various programs and tours of the major war monuments.

He himself participated in an honor flight in October, visiting Arlington National Cemetery as well as the Korean War monument.

“We send care package overseas that include much needed essential items and in some cases we send checks to help support household expenses,” he said. 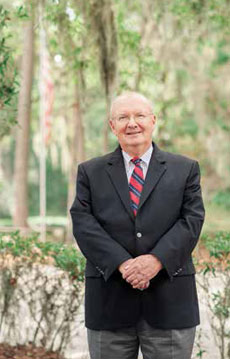 On Hilton Head Island, longtime resident and Vietnam veteran Blaine Lotz also leads a group that focuses on the needs and interests of veterans year-round.

Lotz, who retired in 1992 from the Air Force as a colonel after 26 years of active military service, is current president of the Hilton Head chapter of the Military Officers Association of America. Among his personal awards are the Bronze Star, the Legion of Merit and the Defense Superior Service Medal.

This year his group will participate in the annual service which is being hosted by the local American Legion chapter.

The group also awards scholarships to ROTC high school students planning on going to college and pursuing a military career. Helping veterans has to be a year-round effort, Lotz said. “

All year round we have our men and women returning daily, in need of jobs back home,” he said. “They have a lot to offer. We haven’t done enough to help them.’’

“God Bless the GI who has done everything asked of him or her. Congress has routinely done nothing to help them out,” Lotz said. “These veterans have so much to offer. They really need help with education and medical care.’’

On a statewide front, Lotz said there is a need for retired veterans to get tax relief. He said there have been efforts to have military retirees waived from state income tax.

“The state hasn’t gotten far on it,’’ he added.

Lotz is no stranger to broad government service.

His subsequent civilian career of 13 years in government was spent largely in the Senior Executive Service (SES) and culminated in his appointment as Assistant to the Secretary of Defense for Intelligence Oversight by Secretary Cohen. In 2001 he was awarded the Department of Defense Medal for Distinguished Civilian Service.

The Hilton Head Island Military Veterans Coalition and American Legion Post 185 are presenting a Veterans Day observance at 10:15 a.m. on Monday, Nov. 11, at Shelter Cove Community Park. This year’s program will feature the Parris Island Marine Band providing music starting at 10 a.m. and throughout various parts of the ceremony, which will conclude around 11:30 a.m. The featured keynote speaker this year will be Dr. Mary DeCredico, professor of history at the U.S. Naval Academy in Annapolis, Md. DeCredico has written several books and contributed to several referred journals and numerous chapters in other books. Earning her Ph.D. at Vanderbilt University in Tennessee, DeCredico has received several awards from both the Navy as well as other sources over her distinguished career. She holds an honorary position of Rear Admiral and is an outstanding speaker.

The chaplain will be CDR Kim Donahue, USN, who provided moving prayers on Memorial Day.

Immediately following the ceremony, there will be a sit down plated luncheon reception at the Oceanfront Omni Resort in Palmetto Dunes. “The Headliners” will entertain for the luncheon. There is a $25 per person charge for the luncheon. Call 843-681-4960 for more information.