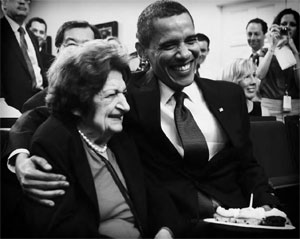 The memorial service fittingly was held at the National Press Club, a former all-male bastion that Thomas and some of her female colleagues in the White House Press Club knocked down the barriers to and won admittance for women in 1974. She was proud of that membership, friends in the press corps reported, and enthusiastically participated in the Gridiron shows held there every year.

A veteran of 57 years with the United Press International wire service, Thomas covered 10 presidents from Kennedy to Obama. She once dated Kennedy, according to one of the speakers at the service. When asked later what she thought of him, she replied, ”He was too fresh.” 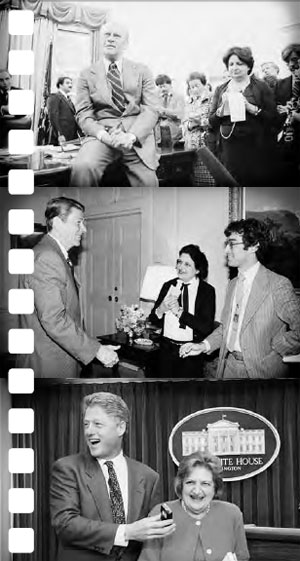 Another speaker told how Thomas came to Kennedy’s aid one time after he was president. It seems Kennedy was having a tough time answering a question at a White House press conference. Thomas looked at her watch and interrupted him to say, “Thank you, Mr. President.” Kennedy then told her, “Thank YOU.”

Several speakers spoke of Thomas’ legendary sources and ability to scoop the other reporters on the White House beat.

They said she could sense news.

Wesley Pippert, a former reporter for UPI who worked with Thomas in the White House during the Ford and part of the Carter administration, said she would pace the halls muttering, “Something’s up,” when she could feel a story coming but couldn’t figure out what it was. Sure enough, he said, the White House would release a big story in a news conference at day’s end.

Sam Donaldson, known for his aggressiveness as a television reporter, told several humorous stories of how he and Thomas jousted for stories.

In one, she had scooped him in reporting that one of the Johnson girls was going to get married. He said the Johnson family was so furious that she had broken the story that they gave him the one detail she did not have — the date of the wedding. Then he in turn scooped her on that story.

Her style was called “tenacious” and “pugnacious” but she also was described as “passionate,” “compassionate,” and “generous” with a big heart.

Pippert, who later headed the Washington bureau of the University of Missouri School of Journalism, told of how Thomas gave of her time to students.

Several speakers related their own experience of how helpful Thomas had been when they were young journalists and new on the White House beat.

One young journalist, whom Thomas had befriended over several years, told of one night early on in their acquaintance when Helen invited her to join her for dinner at her favorite restaurant. She had just turned 21. Thomas asked her what she wanted to drink. When she replied, “water,” Thomas looked askance.

“She said ‘I’ll teach you how to drink like a journalist,’ ” the woman related, drawing laughs from the audience. “She then ordered me a vodka tonic.”

I can personally attest to Thomas’ generosity in helping young reporters from my experience working with her at the 1968 Democratic National Convention in Chicago. I worked in the Chicago bureau of UPI and was assigned to UPI’s convention staff. Thomas and several other reporters from the Washington bureau, plus a handful of regional reporters, completed that staff.

I had previously worked in UPI’s Jefferson City, Mo., and Des Moines, Iowa, bureaus, both state capitols, and covered their state legislatures and state governments, and was anxious to pick up any insight Thomas might offer on covering politics. She was then, as throughout her career, generous with advice. 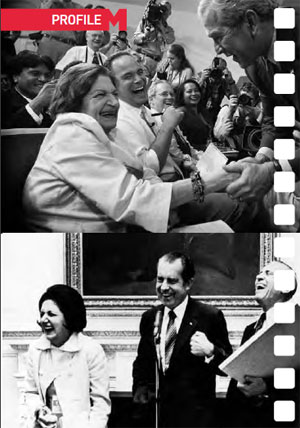 Everyone admired Thomas for being a trail blazer for women at a time when women were not welcome in many newsrooms, and throughout her career.

Judy Woodruff, of PBS, paid a great compliment to Thomas that she would have appreciated.

“Nobody,” she said, “fought harder to keep the powerful accountable than Helen.”

The epitaph that Thomas would like, another suggested, is, “Why?”

“Poor St. Peter,” Woodruff lamented in her remarks. “When she arrived at heaven’s gate, he thought HE’D be asking the questions.”

Thomas died on July 20 in her Washington apartment at the age of 92. She grew up in Detroit, the daughter of a Lebanese immigrant who spoke Arabic, in what family members described as a loving home with a lot of relatives. She was buried in Detroit. The memorial service was held on Oct. 5.

Her husband, Douglas Cornell, a competitor who worked for The Associated Press and was called “the love of her life,” preceded her in death.

Thomas left UPI in 2000 after the company was purchased by News World Communications and joined the Hearst Corp., publisher of newspapers, as a Washington-based columnist.

In talking to a Rabbi in 2010, she said Israeli Jews should “get the hell out of Palestine” and “go home” to Germany, Poland or the United States, a comment that drew widespread condemnation and forced her to resign from her job at Hearst.

Pippert, Thomas’ former colleague at UPI, said the incident unfortunately denied her “the exit she deserved.” However, Susan Page, Washington Bureau Chief of USA TODAY, said, “It doesn’t obscure the achievements of her life.”