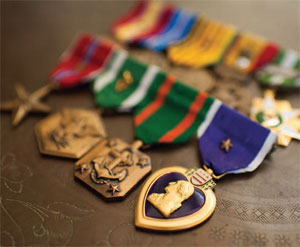 That one jump led to the end of his active military career, a three-decade adventure that had Welzant at the forefront of some of the most dangerous recon missions of the Vietnam war as a member of the U.S. Marine Corps First Force Reconnaissance Company.

He talks of his time in recon, many times on loan to the Central Intelligence Agency, with both pride and melancholy.

“Being forced into medical retirement, it broke my heart, but boy, I was proud to be part of it,” he said. “I was a dive master, a parachutist, I did it all, as much as they’d let me.”

That pushing of boundaries started for Welzant as a boy in Baltimore. He had always seeked out adventure and often scratched that itch with a lacrosse stick in his hand. 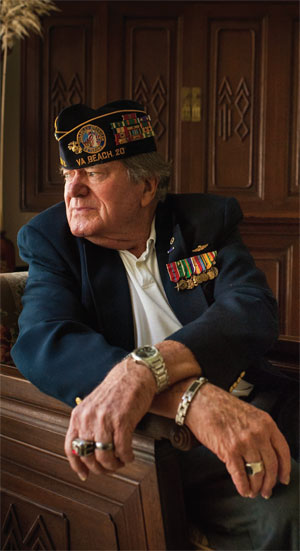 The game was the true Friday Night Lights attraction in Maryland then and today. Though he also excelled at football, Welzant drew notice from both college and military scouts as early as his freshman year in high school.

He came from a “middle class family at best,” so when the Marines approached him about a military career and a full scholarship to play lacrosse at the University of Baltimore, it was a no brainer.

“Where do I sign? That’s about all the decision there was for me. They told me there were adventures ahead and they were looking for jock types,” he said. “I fit that bill and I treasured every moment of it.”

He earned two All-America and three all-conference nods during his time in college, the awards proudly displayed next to his various bachelor’s and master’s diplomas in his Wexford office.

During the summers he would do accelerated training with the Marines. The day after graduating from UB, he was off to Quantico for a year of training.

His dual degree in industrial management and labor relations made Welzant stand out as an asset with brains and brawn, first as a platoon leader in Lebanon in 1958, about the only kill-less mission he went on.

“We landed with submachine guns loaded, only to see beautiful bikini-clad women lining the beaches. It was a diplomacy mission,” he said with a smile.

Later, he earned higher ranks in Beirut and then in Vietnam, as a reconnaissance specialist, making frequent top-secret jumps into thick jungle vegetation.

“We worked 24 hours a day and didn’t even think about it. If you slept, you were a target,” he said. “I lived by a high code of morality and I all I knew was my kill ratio. It’s what kept me alive. Those jumps, it’s just hard to explain.”

He pauses to collect his thoughts — he explained multiple times over the course of our four-hour talk that he’s fighting off signs of dementia these days.

“The turbulence from the plane, it led to turmoil and fright, but that was soon replaced by no noise and complete calm as I floated down to Earth,” he said. “It’s as close to God as I’ve ever felt, being in those circumstances. My guys, they knew what it meant when I’d say I’d seen God again.”

Even in that fateful jump in Vietnam, flying extremely low over the treetops to avoid detection, Welzant was heroic in his resolve to live.

His parachute didn’t open. Instead he freefell some 100 feet into the trees, bouncing from limb to limb until he was wedged in the canopy. Two hours later, a survival team came for him, but the rescue caused more harm.

“The crew chief came down with the hoist but I tried to wave him off. I knew the turbulence of the plane was going to do me more bad than good,” Welzant said. “I was pulled one way by the wind and the plane’s turbulence was pulling me in at the same time. I was nearly stretched to death.”

He was paralyzed briefly before regaining use of his legs. A year later, he was home in Virginia with his wife and two children after being medically retired from active duty. He began a new career as a civil servant for the Office of Personnel Management.

“My contemporaries, they made the rank of general. Folks I served with like Ollie North, they went on to fame. But I never look back with regrets,” he said.

It’s the kind of outlook that has earned Welzant many friends in the area, one of his biggest fans being Beaufort County councilman Stu Rodman.

“I find him to be such a fascinating individual,” Rodman said. “He’s one of those genuine American heroes, and now he’s a hero on another front.”

Off of Welzant’s office is the bedroom where his wife Cory lays in a hospital bed. Three days after moving to Hilton Head full time 14 years ago, she was rearended while driving on U.S. 278 on the North End.

Concussion symptoms quickly progressed into a catatonic state. Doctors have struggled to properly diagnose her through the years.

“She doesn’t have Alzheimer’s but she doesn’t have proper living function either,” Welzant said as he blew a kiss to his wife. “It’s been a rough path. So many people have wanted to force me to put her in a nursing home, but I’m Catholic and I made a vow before God and the church to care for her always.”

He smiles, leaning on his walker “They’ll have to take me out of here first,” he says.

He took out medical policies long ago on both he and Cory, but still struggles to keep up the bills for 24-hour care.

He’ll turn 80 in September and though his body is giving way, his mind is still active.

“I spend much of my day thinking, reading, remembering,” he said. And looking for signs of hope with Cory, once an accomplished Realtor, that isn’t coming. He has a faithful companion, a six-year-old Bichon Frise name Charlie.

Welzant turns serious when discussing immoral politicians — he has a hard time saying the word “Sanford” without using an expletive. And he has strong views about the plight of disabled veterans after nearly four decades of struggling with a disability that keeps him mostly homebound now.

“Listen, I’m honored to have had a chance to serve, so I try to temper my anger,” he said. “But it doesn’t end when we come home. And that level of federal support should never end. Soldiers, they don’t expect the injuries, they’re not asking for handouts. But there’s a long life and a lot of pain and veterans deserve financial support to get through that.”

He is glad his son, Chuck, served in the Marines but is equally glad he retired last July after 20 years at 47. His daughter, 50-year-old Karen, lives in Virginia.

Welzant is honored some see him as a hero, though his thoughts often turn to the aftereffects of war that kept him from being the father he wanted to be.

His first marriage could not survive those rigors. Now, he’s fighting to hold on to his second wife.

“Listen, I have my kids, I have Charlie and I have Cory,” he said with a smile. “I have a lot of memories. And I know I served to my fullest.”