When Donna Taylor’s son, Evan, cut himself with a knife and needed seven stitches, she knew she had to help the Culinary Institute of America student get back into the kitchen.

“I hurt for him, watching him bandage and glove (his wound) and have to go to work and rub that knife blade again,” she said of her son. “I was trying to find something to protect his hand so that he could keep working.”

She came up with The Houndstooth, a tool that helps hold food in place while shielding chefs’ fingers as they chop.

Taylor’s background as a former jewelry designer for Saks Fifth Avenue and her love of oil painting came in handy as she set out to design the product. She wanted it to be comfortable to hold and fit a variety of grips, so she built at least 20 different models using a clay mold. Her son worked with her, showing her how chefs hold their knives and how they chop.

Her husband, Tom, introduced her to the engineering lab at Clemson University, giving her access to its 3-D printers to help make the food-prep tool. She partnered with the school on the final product, which is an injection mold made from a special material called Tritan, approved by the FDA for food use. It was important to Taylor that her new product be BPA- and carcinogen-free, she said, and the device even keeps the knife sharp as it slices. 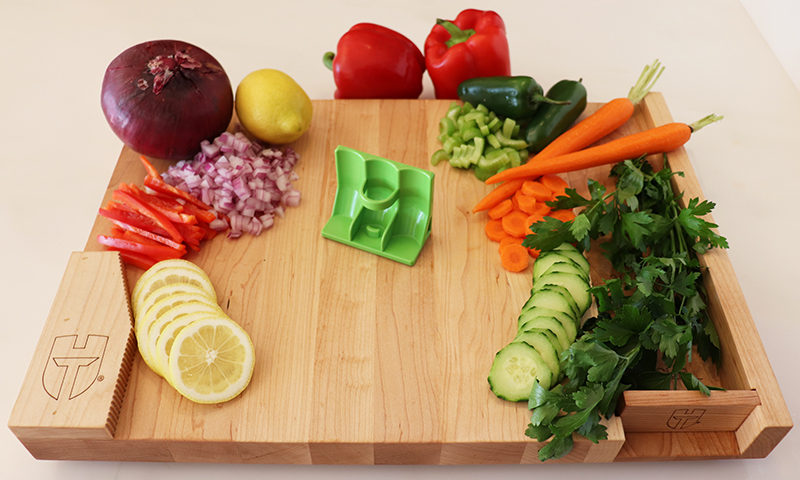 Once she had the model made, Taylor needed a manufacturing facility. She wanted her product to be made in the U.S., even if it meant it would be more expensive. Eventually, she found an affordable contractor and The Houndstooth began to roll off the production line, while Taylor applied for patents in the U.S., Asia and Europe.

The Houndstooth name comes from the patterned uniform traditionally worn by apprentice cooks. It also references the teeth on the bottom front face of the design, meant to “bite” into the food being prepared to hold it steady for the knife blade. The device can be used by restaurant chefs in their professional kitchens, or by home cooks looking to improve their knife skills. It helps users slice and dice fruits, vegetables, meats and other items, all while protecting fingers.

“So much went into this tool in the way of design,” Taylor said. “It’s so well-engineered that it doesn’t slow down a professional chef because it was made with a professional in mind. I use it nearly every time I cook because it makes cooking easier.”

The Houndstooth hit the market in October. Taylor has expanded the offerings to include a bundle that also comes with a cutting board, chef’s knife and vegetable guide — the cutting board, named The Perfect Bite, features a gripping edge, built-in measuring chute and removable grate. It’s another of her inventions meant to make food prep easier for cooks of all abilities. It pairs perfectly with The Houndstooth, she said.

“I think it’s good for anyone: It’s good for home cooks who are afraid of their kitchen knife. It’s good for the foodies who want to learn knife skills. It’s meant for a chef who needs protection or has injuries,” she said.

For more information about The Houndstooth, go to www.thehoundstooth.com.