It’s been said that necessity is the mother of invention. That’s not always the case in the automotive industry, where invention is often the byproduct of vanity, such as fancy trim packages or tires that look good but do nothing to improve the ride.

Elongator is the exception, conceived 20 years ago in Bluffton by a guy who knew his pickup wasn’t doing the job like it should.

“I was in engineering and construction, and I sent some guys out for lumber and they were gone forever. It turned out one of them had to sit on the lumber while the other drove,” said Steve DeSimone, inventor of the Elongate tailgate. The truck’s bed wasn’t long enough to accommodate the lumber. “I started thinking, I need something that’s always there, it’s not in your way and it doesn’t impede anything.”

And thus, the Elongator was born — if only in the form of a crude prototype that existed solely on napkin sketches and ideas DeSimone would share with his friends. One of those friends was Bluffton town manager Marc Orlando, who immediately saw the potential and knew it would be a good fit for the Don Ryan Center for Innovation.

FOR PEOPLE WHO ACTUALLY USE THEIR TRUCK TO WORK AND FOR PLAY, WE HAVE

“I’m thinking, a truck tailgate? We do high-tech, internet-oriented stuff. But I came back and saw it and said, ‘This is really neat,’ ” said David Nelems. 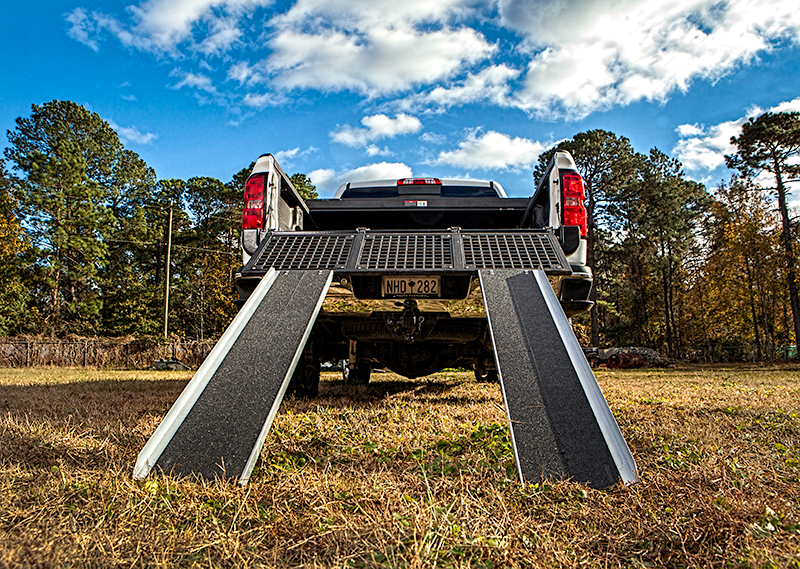 Then the CEO of the center, Nelems saw in Elongator not just a brilliant new product, but also an opportunity to return to the private sector. He now serves as DeSimone’s operations manager.

Thanks to the connections he made through the center, DeSimone was able to work with the S.C. Commerce Department to find a manufacturing base, and Elongator went into production. The company’s headquarters are on Simmonsville Road in Bluffton, and many parts are manufactured in the upstate. Other parts are made in Georgia and Pennsylvania.

The Elongator acts as an after-market replacement for a truck’s tailgate, fitting nearly every major pickup model. Made of a sturdy mesh frame, textured for traction, it flips out to add more than a foot to the truck bed’s length. And it connects to a set of ramps that, when the extension is lowered 30 degrees thanks to an easy-to-use beveled slidebar, makes for a sturdy incline for loading up things like ATVs or motorcycles.

In addition to the extra truck bed space, special “modules” can connect to the extension to provide safe storage space for anything from fishing rods to tailgating supplies.

“For people who actually use their truck to work and for play, we have functionality that no one else can offer,” DeSimone said. “It’s more than ramps, it’s more than extensions. When you don’t need it, it disappears.”

DeSimone and Nelems debuted the Elongator at the 2018 Specialty Equipment Market Association trade show in Las Vegas. It’s the world’s largest trade show for automobile accessories, featuring thousands of new products and vendors. The Elongator was deemed the best of the bunch, earning the title “Best New Consumer Product” and opening doors for DeSimone to some of the biggest names in trucks, from Ford and GM to Toyota.

Built on a foundation of “a lot of effort, a lot of design work, a lot of late-night thinking and a lot of road trips,” Elongator went from concept to completion with help from the Don Ryan Center.

“It opened up a lot of doors. David had a lot of connections with a lot of these state agencies, and we found this manufacturer because of the Don Ryan Center,” DeSimone said. “We never would have gotten there without them.”