FOR HILTON HEAD COUPLE, SUCCESS RUNS IN THE FAMILY

For Myla Lerner, it’s always been about the domino theory: Connect with creative, smart, energetic people and obstacles will fall down, one after another.

“I’m not shy,” said Lerner, an award-winning Broadway producer and president of the board of Lean Ensemble Theater, a performing arts company on Hilton Head Island. “When we first got here, we knew hardly anyone, so I made some connections.”

But her most important connection came more than 40 years ago, when she met her future husband, Larry Kramer. He was a year ahead of her at Syracuse University and destined for a distinguished career as a journalist and entrepreneur.

Kramer left Syracuse to pursue an MBA at Harvard; Lerner graduated a year later and set off for Washington, D.C., to teach. Kramer — Myla calls him by his last name — got a job as a reporter at The San Francisco Examiner, and his work frequently took him to Washington. The pair reconnected over dinner in Georgetown.

The relationship blossomed, then the first domino fell: “I convinced her to move to San Francisco,” Kramer said. “A year after she moved, I got a job offer from The Washington Post.”

DESPITE THE FACT THAT THERE WERE ALWAYS MEDIA OUTLETS THAT HAD STRONG POINTS OF VIEW, THERE WERE COMMON DENOMINATORS, VOICES EVERYONE RESPECTED, WHO COULD BRING PEOPLE TOGETHER.

Careers and family life galloped ahead: They married. Their children, Matt and Ericka, were born. Kramer rose rapidly at the Post before returning to the Examiner as executive editor. He founded CBS MarketWatch and later was named president of CBS Digital Media. In 2012, he became president and publisher of USA Today. 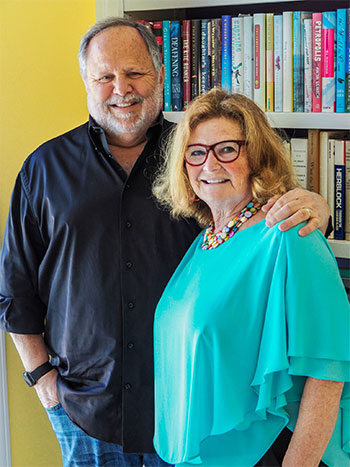 Meanwhile, Lerner became a Broadway producer; she invested in the successful musical “Hair” in 2011, and then earned a Tony Award for “Pippin” in 2013.

After years of shuttling cross-country, pursuing their respective careers from their homes in New York and San Francisco, the couple bought a house in Palmetto Dunes. They’d never even vacationed on the island, but as usual, Lerner had connections:

“One of my closest friends from college, Pam Freedman, said she was moving to Hilton Head.”

Freedman’s husband, Roger, had acquired land along Broad Creek and planned to build ZipLine Hilton Head. Soon after, a second close friend, Sue Sigalow, called and told Lerner that she and her husband were moving to the island, too. Lerner’s and Kramer’s interest was piqued, and “we came down for the opening of the zip line and drove around and loved it.”

A mutual friend introduced Lerner to Blake White, artistic director of Lean Ensemble. They hit it off and decided to work together. White had named the company Lean Ensemble for two reasons: “One, we were very lean,” Lerner said. “We had no money and were going to do bare-bones productions. And two, after the curtain went down, the cast would ‘lean in’ and talk to the audience. We do it every single performance. Conversations about the play should begin after the curtain goes down.”

The theater even extended the technique to a play about Alzheimer’s disease. For every “talk-back” session afterward, “we had somebody from the nonprofit Memory Matters talk to the audience and answer questions.”

Lean Ensemble will begin its fourth season in October, focusing on the theme “what’s old is new again.” The season will include five productions; its first is “Who Am I This Time?”.

Kramer, for his part, says he is “intellectually involved with the same issues as always.” He left USA Today but serves on the board of its parent company, Gannett, and serves on the boards of Syracuse University, Harvard Business School Publishing and TheStreet, a financial news and services website.

And he still plays close attention to the changing political and media landscape — and notes that the state of national politics during Watergate is similar to today’s environment. “It’s just like it was then; it’s almost a mirror image. The divide is the same and it’s a harsh division. The most interesting similarity between now and then is the number of young people entering journalism because they want to make a difference.”

As an observer of journalism’s transformation from print to digital, Kramer is “guardedly optimistic” that fact-based, no-spin journalism has a future. “The need for the truth is really high,” he said, noting that the most important difference in the news media today “is the lack of common ground.” Partisan news commentators inflame the debate by too often providing opinions instead of proof.

“Despite the fact that there were always media outlets that had strong points of view, there were common denominators, voices everyone respected, who could bring people together,” he said. “Today, there are none, and it makes the world a little more dangerous. Where are the Walter Cronkites when we need them?”