JUST FIVE WEEKS AFTER GIVING BIRTH TO HER FIRST CHILD, DANIELLE VELEZ OF BLUFFTON FOUND HERSELF NEEDING A PLACE TO LIVE. 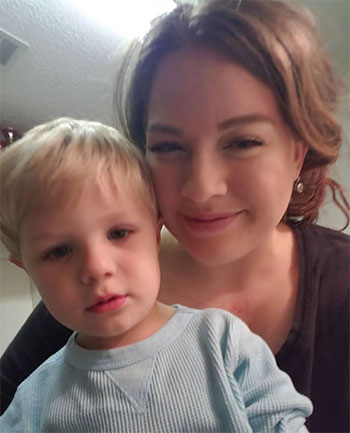 Velez contacted the local Medicaid office to find out what programs were available to her and her infant son, Jameson. She was referred to Family Promise of Beaufort County, an affiliate of the national nonprofit organization that provides temporary shelter, food and other resources to homeless families with children.

Local congregations provide shelter for the families, who move once a week from one location to the next. Volunteers serve food to the families and offer companionship. Staff members provide case management and help families find jobs, child care, school placement and ultimately affordable housing.

After a thorough interview and background check, Velez and her son were accepted into the program. While it was not the ideal situation for a new mother and her child, Velez is thankful for the organization and its volunteers.

Over the next five weeks, Velez continued to work full time and care for her baby. She also attended classes through Family Promise that focused on household management, parenting skills and budgeting, among other lessons.

It was a stressful time for Velez, but she said the staff and volunteers at Family Promise were excellent. Almost four years later, she still keeps in touch with her counselor and case manager.

Velez now works in guest relations for Marriott Vacation Club, but even with a good job, she has struggled to afford a place of her own. She and Jameson live with her mother for now, but she hopes to get their own place in about a year.

Velez said she doesn’t qualify for government housing or food stamps because of her income, but she still makes too little to pay for her own home.

“The lack of affordable housing, the lack of any type of public transportation, and the issue of child care on the weekends and in the evenings is huge,” Family Promise executive director Lynda Halpern said. “It hurts these families, and it’s hard keeping a workforce here. A lot of folks in the hospitality and service industries are having trouble finding people to work in their restaurants and in their stores because people can’t afford to live here.”

On average, Family Promise program participants make about $10 an hour, Halpern said. She said an individual would need to make $16 an hour and work 40 hours a week to afford an apartment that costs $750 a month plus utilities, and there are so few of those units available that there are long waiting lists.

Halpern said Family Promise of Beaufort County currently has four families in the program. The parents have all found jobs, started bank accounts and are saving money. They are ready to move out, but there’s no place for them to go.

“It’s kind of a clog, so to speak, in the pipeline,” Halpern said. “There’s more people out there that need help, but we have no space for them.”

Halpern said correcting the problem will require the help of the community and businesses that are affected by the lack of employees. Family Promise of Beaufort County opened its doors in July 2008, and to date has helped 110 families with a total of 219 children, Halpern said. More than 700 volunteers help the local organization.

Family Promise of Beaufort County partners with 36 congregations of many faiths from Beaufort, Bluffton and Hilton Head Island to offer services to its guests. Thirteen congregations provide shelter to Family Promise guests, who stay at each of their facilities for one week at a time. The other 23 congregations are considered support organizations; they provide meals and stay overnight with families. Volunteers also help at the day center, doing administrative work and picking up donations. Family Promise staff provides all transportation.

As of August 2016, Halpern said, there were approximately 6,500 homeless children ages 3 to 18 in South Carolina, with more than 550 of them living in Beaufort County. Family Promise is the only homeless shelter in the county.

“There’s always support out there,” Velez said. “Even when it feels like nobody is there to support you, there’s somebody. And that somebody for me was Family Promise. ... They were there when we needed it the most.”

Family Promise of Beaufort County is always looking for volunteers and donors. The organization is also seeking donations of used cars. For more information, call 843-815-4211 or go to www.familypromisebeaufortcounty.org.