“I’M A BUILDER AND A CRAFTSMAN,” ROBERT GRAVES JR. SAID IN A THICK SOUTHERN DRAWL. A PIONEER AND ONE OF THE FIRST DEVELOPERS ON HILTON HEAD ISLAND, HE WORKED CLOSELY WITH CHARLES FRASER.

“Charles would give me his vision and talk to me while designing a home,” he said. “Without him, I wouldn’t have raised seven children and 22 grandchildren at last count.”

Graves, 79, founded his custom home construction business in 1959. It is still in operation today, though the island looks a lot different now than when he started.

“When I arrived on the island, I think there were 1,500 native islanders, several new families, and just a ferry boat,” Graves said.

His father, state Rep. J. Wilton Graves, was integral to the early economic development of Hilton Head. He fought for money for the island’s first roads, a state-operated car ferry in 1953, and a four-lane bridge, dedicated to the legislator in 1982. 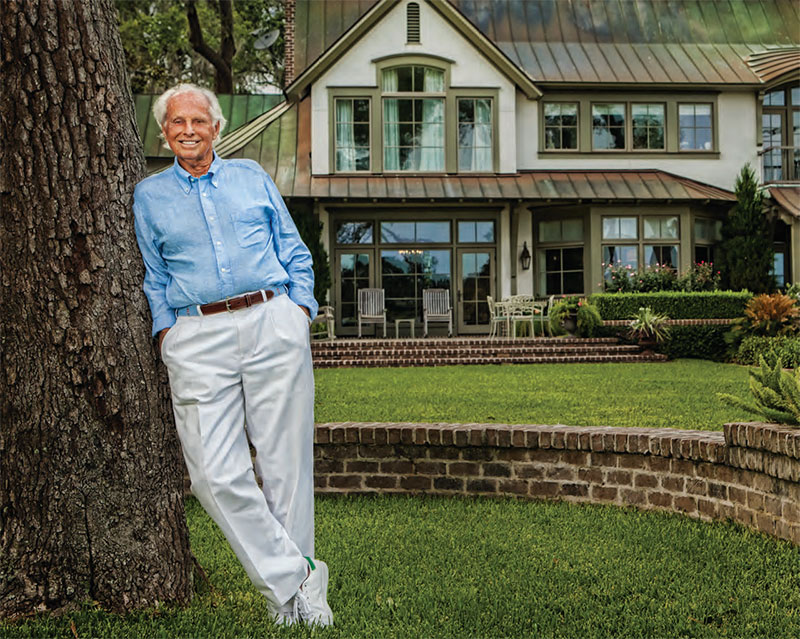 Graves grew up on Pepper Hall Plantation in Bluffton. “I lived on a farm with my aunts and uncles and cousins; no lights, few neighbors, and lots of live oaks and Spanish moss,” he said. “I grew up in a Gullah environment — both black and white. If you were lucky, you’d have a small boat to go out fishing and crabbing. Then, as you got older, you’d be lucky to have a little bigger boat, and water ski.”

Graves developed a passion for building boats as a teenager, and he crafted boats in a shop near Sea Pines Circle while growing his custom home business.

Sketches of his boat designs line the walls of his Spanish Wells home. His most prized work, the 39-foot Seven Sisters, is moored at his dock on Broad Creek. Its teak-clad cabin includes plush leather seats, a luxurious galley and sophisticated nautical technology.

“Back in the day, when we’d launch a boat, we’d put it on a trailer and take it out to Sea Pines Circle. Everyone would come out of their office and we’d parade the yacht down the street. Of course, we always broke plenty of bottles of champagne,” Graves said. “Boat building has challenges, handcrafting, and creativity that I will always enjoy. It’s the impossible — but I always believed that all things are possible.”

Growing up, Graves also enjoyed hunting. “In the earlier days, we’d go hunting at night with the hounds in Sea Pines. All the residents would come out,” he said. “We’d build a fire and listen to the dogs chasing raccoons up the trees.”

One of his most memorable moments involved a prank played by his best friend, Bill Clark. “I was out at Pepper Hall, unwrapping twine and feeding hay to the cattle when Bill says, ‘We goin’ coon huntin’ tonight.’ I say, ‘Yeah? Where?’ And he says, ‘Sea Pines. We’ve got a little competition going on.’ So, we go up to Sea Pines around 7 p.m. and there’s all these fancy cars there from all over the country.”

Clark had signed up Graves to compete in the famous Grand American Coon Hunt. “Thirty-one states and 411 dogs took part,” Graves said, laughing. “It was like putting me in a golf tournament when I didn’t even know how to keep score.”

But when they cut the dogs loose, Graves’ dog trailed a raccoon up a tree faster than any. “I heard my dog barking, ‘Woo-ahoo! Woo-ahoo!’ and told the judge. He laughed and said he probably found a deer. But I shined a flashlight up the tree and saw the telltale glowing green eyes and won 100 points for the first treed raccoon,” Graves said. “We won over again and again. The other dogs didn’t know much about the marshes — they were slow learners. We wrapped up around midnight with 1,100 points and won the entire hunt.”

But hunting and boating weren’t the only childhood activities that stuck with Graves. Growing up, his family farmed pulpwood and raised tens of thousands of chickens and turkeys on their 100-plus-acre home. “We also owned horses and cattle, which is one of the reasons why I ride cutting horses to this day,” he said.

“Cutting” is an equestrian competition that evolved from cowboys herding cattle in the American West. Graves competes at the national level. During a competition, the rider and horse perform a “run” before a panel of judges that demonstrates the horse’s skill in separating cattle from a herd. Graves was a finalist in the 2017 Augusta Cutting Horse Futurity. 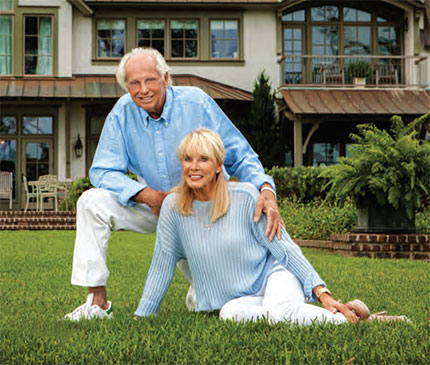 Graves’ greatest passion is his wife, Diane, and his family — including the people he’s met in the community during his time as a homebuilder.

“Today a lot of builders are really contractors — they assimilate contracts, people and products, which is probably more profitable in the long run,” Graves said. “Back in the day, you had to design, assemble and handcraft a home. I’ve been very fortunate to meet a lot of wonderful people in my time.”

MAKING THEIR MARK. Each month this column profiles Lowcountry citizens who offer fresh insights and a deeper sense of connection to our community. Know someone making a mark? Email: kim@hiltonheadmonthly.com.