David Ames is the newest member of Hilton Head Town Council. The 71-year-old planner and developer defeated three other candidates during a special election for the Ward 3 seat on May 3.

The special election was needed after councilman Lee Edwards moved out of the district. Ames won 65 percent of the vote and will serve out the remainder of Edwards’ term, which concludes at the end of this year. If Ames wants to keep the seat, he will have to run again in November.

Here are a few questions Monthly had for the new councilman.

WHO IS THIS GUY? 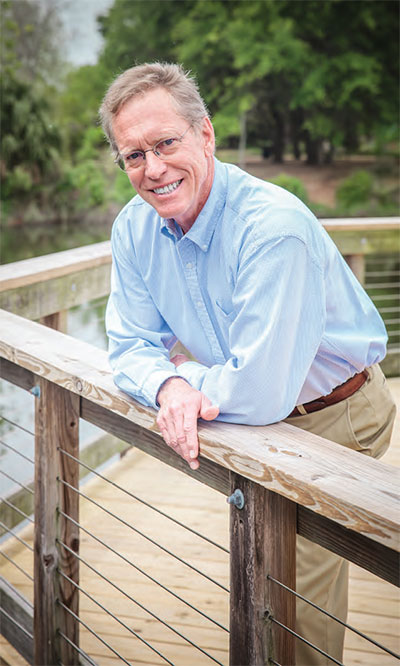 David Ames, 71, graduated from Princeton University and then went on to earn a master’s of architecture from the University of Pennsylvania, with emphasis in city and regional planning. He has planned and developed projects for his own account and consulted in both public and private sector community planning and development. The size, scale and complexity of the projects have varied from small, single-use projects to major resort developments, as well as town, county and regional plans. Ames is past chairman of the Community Foundation of the Lowcountry, The Children’s Center, Mayor’s Task Force for the Island’s Future, Beaufort County Aviation Board, Hilton Head College Center, Leadership Hilton Head and Sea Pines Academy, and he is chairman emeritus of Hope Haven of the Lowcountry. He has served on other local and state boards, including S.C. Independent Colleges and Universities, Leadership S.C., S.C. Nature Conservancy, Hilton Head Island Institute, the Hilton Head Island-Bluffton Chamber of Commerce, and Hilton Head Community Development Corporation. He led the $4.5 million capital campaign of The Children’s Center and co-chaired the $6 million capital campaign of the Boys & Girls Club. He was the recipient of the Alice Glenn Doughtie Good Citizenship Award in 2009 and the Marilyn Stein Bellet Award for the Advancement of Social Justice in 2011. He is an honorary Rotarian and Paul Harris Fellow.

MONTHLY: Of all the candidates, you seemed to put the most effort into campaigning. Did you or your supporters reach every door in Ward 3?

DAVID AMES:  Right from the beginning, I regarded the others as strong candidates. I owe the final vote count to my very dedicated team. Most had worked for candidates here and other places. Their experience made the difference. They knew what they were doing, and with such a short window for the campaign, we needed to make every moment count.  I am very much indebted to them. I also have to thank the many voters who supported the campaign financially, by endorsing me, and, most of all, by voting for me.

MONTHLY: What made you want to run?

AMES: It was the combination of Town Council’s commitment to the visioning process, the opportunities it represents for the future of the island, and my background in community planning that made me decide to run. I believe our town is at a pivot point as it faces the future. The island no longer has the same robust economy of tourism, real estate development and construction, nor is it still the focus of new investment in the region. Today, it relies almost solely on tourism for cash and retirees for capital. This combination alone will not sustain the island as a thriving community.

MONTHLY: In your opinion, what made you the best candidate?

AMES: I think voters decided I have the skills, passion and leadership to make a positive difference on the council. For more than 30 years, I have been doing volunteer public service on numerous boards and helping build important community assets like the Boys & Girls Club and new Children's Center. I'm past chairman of the Mayor's Task Force for the Island's Future and serve on the Circle to Circle Committee. I'm very familiar with the town's pressing issues and will hit the ground running.

AMES: Town Council is dealing with a wide variety of issues. I have been involved on the periphery on several of these matters for some time, and have wanted to get involved in productive decision-making. I will do my homework and listen to the opinion of residents, especially the constituents in my Ward 3.

I want people to feel comfortable contacting me with their concerns and ideas. Residents may not agree with all of my decisions as a councilman, but I hope they will respect me for giving every decision well-reasoned thought for the long-term benefit of our community.

MONTHLY: Hilton Head Island is faced with many challenges. In order of importance, how would you rank them?

AMES: The biggest challenge is the same as the biggest opportunity: it is the community’s vision for the future, the components of that vision, and the action plan/master plan to implement that vision. Deciding who we are and what we want the world to think about us will allow the council to target investments for the good of residents, businesses and guests. This process will also put into perspective other challenges facing the council.

But, as part of that overall visioning process, we must recognize the employment crisis that exists today and will only become more acute over the next five years. Increasing delays traffic congestion and accidents and off-island employment options are threats to our service-oriented economy as more jobs become available in Bluffton, Hardeeville and Savannah. And too, the explosion of off-island population growth means severe pressure on our public beaches. These are new realities that must be acknowledged and understood — but there are also old ongoing concerns, like drainage, sewer and road issues, for the island that warrant our continued attention.

MONTHLY: What do you expect to accomplish before the end of this seven-month term?

AMES: I would like to have contributed to progress being made on the visioning and that my voice will have made a difference in how we look at marketing the island, how we protect critical lands, and how we engage all citizens in our community conversations — especially minorities and our younger population who will be inheriting the future stewardship of Hilton Head Island.

MONTHLY: Concerns have been voiced — due to your close ties to Mayor David Bennett — that you may try to team up and pressure other council members. How do you respond to those concerns?

AMES: I have enormous respect for our mayor. David is a man of tremendous personal character who has a passion for doing what is right for our community and elevating our town government so that it can be an effective instrument to achieve progress in areas that have remained stagnant for too many years. Like David, I believe in government transparency and finding ways to bring together the best talent of our community in order to solve the problems we face. While David and I do agree on many items, there are also issues where we are not necessarily on the same page. The good news is that we are both good listeners and are both results-oriented.