Duffie Stone has always been a runner, but he wasn’t always a racer. That happened by accident about five years ago when, just for fun, he signed up for the Hilton Head Jingle Jingle 5k. He was hooked.

For Stone, running and prosecution go hand in hand. “I use running to think. I don't listen to music. I think about my cases. I can organize openings, cross examination and witness order in my head during my runs. The problem is that the more complex the case, the longer the runs. That's how I went from running 5ks to marathons.“

This year Stone ran his third and most challenging marathon: Boston.

Running a marathon is the perfect metaphor for trying a big case. Both require phenomenal amounts of preparation. “People see the end result, the trial and the race. They don't see the preparation and the commitment it takes to get to that point,” he said. Over the last two years Stone spent hundreds of hours training for the Boston Marathon, and it paid off. His finish time was 3:28:41, fast enough to qualify him for next year’s race. 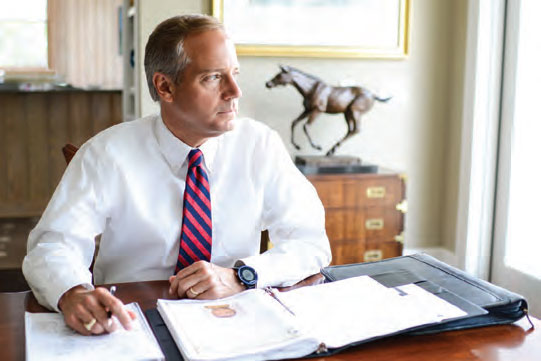 In the same timeframe Stone spent hundreds of hours in and out of the courtroom prosecuting Tyrone Robinson, Aaron Young and Aaron Young Jr. for the murder of Khalil Singleton. “Whether you are a marathon runner or a prosecutor you have to put in the work, the thought and the commitment to be successful. One of my favorite quotes comes from Bobby Knight. He said, “The will to win isn’t nearly as important as the will to prepare. “I repeat that to every prosecutor we hire."

The challenge of marathon training in the lowcountry is the heat and humidity, emphasis on humidity. But there aren’t any hills. While that makes it easier to get in the miles, it doesn't prepare you for the famed hills of Newton at the 20-mile mark of the Boston Marathon. “The Cross Island Expressway isn’t exactly Heartbreak Hill,” Stone said, “but I trained on it anyway.”

RUNNING ON HIS RECORD

These days Duffie Stone is hitting the pavement in a different way. He is running for re-election as our Solicitor and pointing out how, as a career prosecutor, he constantly seeks out ways to make his office more effective. “I am proud of what we have accomplished over the last ten years,” Stone said

. In the courtroom, Stone and his team found a way to prosecute all three gunmen involved in the murder of 8-year-old Khalil Singleton, though only one fied the fatal bullet. Two of the shooters were indicted under a century-old “mutual combat” law. “Everyone involved in a shootout should be held accountable when an innocent person like Khalil gets killed. They should not escape because it wasn't their gun that fied the fatal bullet.”

Stone also created the career criminal prosecution unit. This team — lawyers, investigators, victim advocates and intelligence analysts — works together to prosecute repeat offenders, ‘the worst of the worst.’ They have convicted over 400 of these criminals and maintained high conviction rates year after year. The program has been so successful that other solicitors are using this approach.

“Making our community safe has to take into account prevention as well as prosecution,” Stone says, “especially when it comes to juveniles. When I took over we didn't have any programs for young people. We had intervention and drug court programs for 33-year-olds but not 13-year-olds. With the help of Family Court Judge Peter Fuge, Beaufort County and the Town of Hilton Head, we now put an emphasis on preventing today’s juvenile delinquent from becoming tomorrow’s career criminal.”

“We have also made great strides is in victim services. In 2006 we had just one victim advocate for all of Beaufort County trying to help the victims of 2,500 new cases per year. We now have four. We also brought the worthless check program to Beaufort County, which has returned one million dollars to victims of fraudulent checks since 2008. And the best part,” Stone says, “is that the person who wrote the bad check pays for the program, not the taxpayer.”

Stone’s work has caught the attention of others in our state. Governor Nikki Haley appointed him as the only solicitor on her Domestic Violence Task Force, and Stone was elected Chairman of the State Prosecution Commission.

Through these organizations he worked with the legislature to enact new human trafficking law, reform domestic violence law and, most recently, approve state funding for 144 new prosecutors in courtrooms throughout South Carolina. 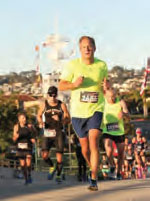 148: Number of runners from South Carolina

10: Number of runners from Beaufort County