Jessie immediately acknowledges the lack of material hanging about. She’s been sending off paintings as fast as she can. She’s had to adjust to the demand, growing now into waiting lists that trail long into the year. Like her husband leaving the house every morning for Wall Street, Jessie tries to keep regular hours, often putting in a solid 10 at her studio. In the mornings she sticks to business, perhaps responding to requests from clients for a particular piece, perhaps negotiating a commision for new paintings—skills she’s had to learn quickly. 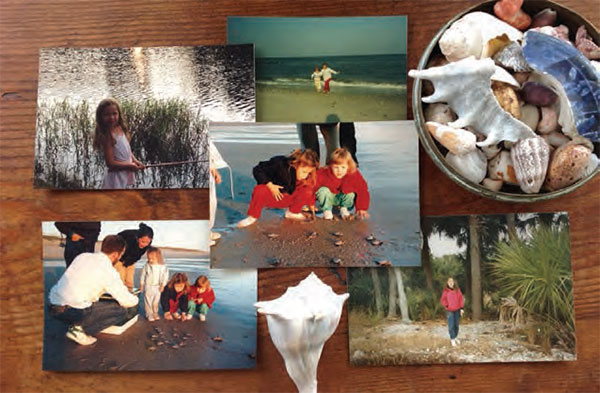 With that out of the way, Jessie paints. Pigment tubes scatter her small work table with names like Yellow Ochre, Terre Rosa, and Torrit Grey. With a slight nudge I coax out her arcane knowledge of pigments and their natural origins. We were still on the usual “how’s your mother?” It turns out most black pigment comes from the carbon of charred bones. She fawns over Torrit Grey, a special batch produced every year on Earth Day by Gamblin Paints. Evoking the color of pluff mud, the pigment is vital to her paintings of Lowcountry flora and fauna. She reminisces, “When I was younger, marshes meant swimming, meant how much mud could I get into before mom called me back to the dock.”

Finding common ground, we rave over the primitive charm of Cumberland island. I recall the armadillos, wild horses, and particularly extravagant live oak groves. When Jessie was a child her family visited the sea island preserve with local painter West Fraser who impacted her by his labor of love, going out regularly to paint nature. She remembers waiting to be alone to sneak a look at his easel and canvas. This was his craft. 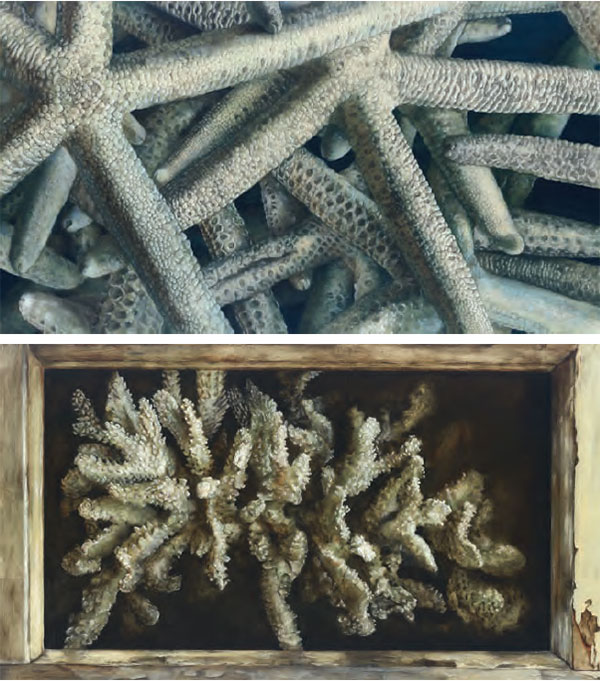 Jessie Peterson Tarazi is new on the New York art scene and is quickly grabbing the attention of collectors. Her modern composition and scale stands in juxtaposition to a yearning nostalgia for the calm and tranquility of the islands where she was raised.

My eyes delve into her latest painting. White starfish seem to levitate in a dark chamber of the ocean. Those on top feature the most detail whose bright knobs and tangible texture give way to blurrier specimens, a result of light fading with depth. What strikes me is how much Jessie can do with such a neutral palette, consisting mostly of milky whites, earthy greys and murky blues. The starfish, like many of her subjects, are arranged from the beach finds collection of longtime family friends. This piece is heading to Charleston’s Vendue Gallery. Another painting, of coral, hangs in exquisite light at Bluffton’s Red Fish restaurant. In September when The Inn at Palmetto Bluff re-opens after an expansion, you will find her paintings filling its walls.

Maybe you grew up with her, maybe you saw her grow up. Jessie bears a striking resemblance to her mother, what with her olive complexion, delicate arched brows and distinct cheekbones. Born and raised on Hilton Head, she went to Montessori and then Prep before making her first leap to The Governor’s School for the Arts and Humanities in Greenville. It was here she nurtured her love for art and honed her technique. “There’s nothing like it. When I was there you could see people from all parts of the state gettting the same scholarships as everyone else. It has been a treat to watch my fellow Alumni take off,” says Tarazi. After earning her Bachelor's at Carnegie Mellon, Jessie made the leap to study at the decidedly classical New York Academy of Art. From there, her career whispered awhile, then blossomed. 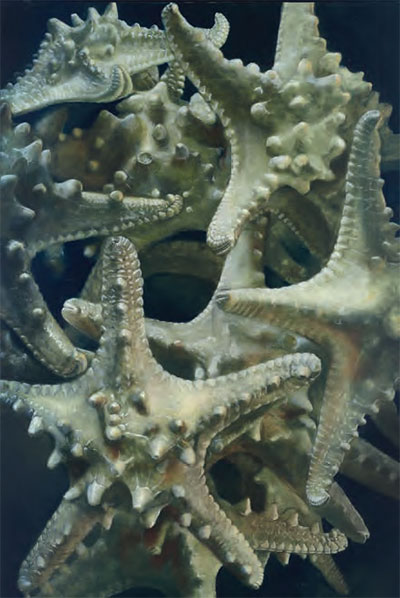 But I beg the question, for all her paintings of Lowcountry charm, what is it that keeps her in New York City? I mean, she’s about as far from edgy contemporary art as it gets, the kind you’re likely to see at the New Whitney in Manhattan’s chic Chelsea district. Well, she answers, first of all, her favorite museum is the Metropolitan Museum of Art where she most loves the Dutch masters. Several times, in fact, she performed live painting in the style of the old greats. While her art may offer a vision of primeval bliss, life is simply more complex. She’s newly wedded to a finance analyst, which keeps her rooted to Manhattan for now. When she first moved here, ten years ago, the city fed her all the energy and enthusiasm she needed. “Now that I’m older,” Jessie adds, “my good friends live here but it just feels dirty. It’s like being in the middle of a hive where on Hilton Head, when you’re out on the marshes and your hiking, that’s what feels alive to me now.” When I ask of her long vision she admits she’d like to move back to the South when grounding a family could use the supportive threads only Hilton Head can offer. For now, Jessie must enjoy her peppered visits back to the Lowcountry.

By striking at the natural roots of the coastal landscape, Jessie’s paintings evoke a nostalgia we can all relate to. Maybe it’s a still life of objects found on barrier islands, the skull of an alligator, sea glass, or the bone-like piece of coral. For me it’s the shucked oysters littering the ground that stand for a way of being together. Together, her vision and my memory form a tapestry of childhood wrapped up in this land, one we left behind for our own reasons, to which some of us may one day return.