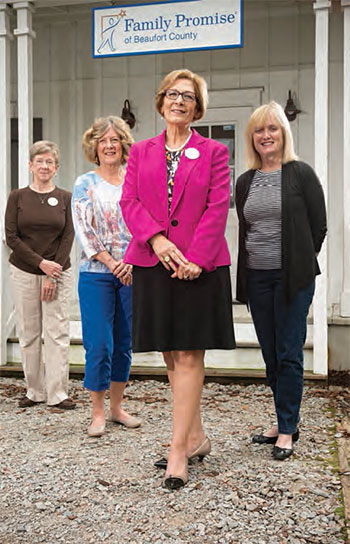 Family Promise of Beaufort County helps the situational homeless rise above their situation.

It could happen to anyone in the silent “working poor” demographic that invisibly blankets Beaufort County. And what’s worse, it could happen at any time.

For many of the working poor, the story is the same: The paycheck comes in, is divvied up between the rent, the bills and the groceries, and is gone. Deposit, spend, ration and repeat. As long as nothing unexpected happens, it’s just enough to keep lights on and bellies mostly silent. And then something unexpected happens. It could be the loss of a job. Unexpected medical bills. A house fire.

Whatever it is, it violates the precarious order of life lived paycheck to paycheck, and brings the entire house of cards down in metaphysical fashion. With that one disruption, a family of working poor, looking for all the world like anyone else in your neighborhood, joins the ranks of Beaufort County’s homeless.

These are not the homeless as you might picture them, solitary survivors adapting to life on the streets. These are families. These are young children who go to school every day bearing the secret shame of having homework, but no home to do it in. These are parents who have put in the hours, given the sweat equity that society demanded of them and found their efforts ultimately weren’t enough.

If you think that’s a straw man, think again. There are 450 of those children sleeping in cars across Beaufort County tonight. These are the situational homeless all around you. And it’s Family Promise of Beaufort County’s mission to raise them up so they never experience this again.

“I think the reason our program is so successful is because we’re really so much more than a shelter,” said Family Promise Executive Director Judy Hinman. “The shelter is important, but we try to find the root cause of why they became homeless and then work with families.”

The shelter comes in the form of 30 volunteer churches from all over Beaufort County, on both sides of the Broad. Each takes it in turn to offer up their place of worship for a week to host the four families under Family Promise’s care at any time. A crew of 50 volunteers helps ready that week’s church for the families, provides meals and, most importantly, helps mentor them.

That’s the “working with families” Hinman mentioned; a huge part of the program is focused on passing on life skills to families, ensuring that they know proper spending and budgeting while letting them continue to work and save up during their time in shelter.

“It usually takes 30-90 days before a family is able to exit the shelter program,” said Hinman, “but when they leave, they usually leave with a job, an apartment, childcare and transportation.”

The help doesn’t just end when the family is back on their feet and under a roof. Family Promise has found great success with its Leap Forward, Staying on Track program. Essentially, the organization, through financial donations from generous volunteers, will cover security deposits, utility set-up fees and all the hidden costs of finding a new home. But in return, clients have to agree to work with Family Promise for a year, allowing volunteers to monitor their income and spending to ensure they’re staying on track.

“We really make sure they’re sustaining themselves and making responsible decisions,” said Hinman.

And what’s more, as part of this program, they’re required to give back by helping mentor other families and share in their success. This not only lets families who have completed the program share what they’ve learned, it lets families entering the program see that there is light at the end of the tunnel.

“This past year we had a 91 percent success rate,” said Hinman, meaning that a year later, 91 percent of families who had entered Family Promise looking for shelter were employed, financially solvent and had a roof over their head. “It’s hard work; you’re sleeping on church floors, you’re traveling around to a different church every week, but it works.”

To volunteer or donate, visit www.familypromisebeaufortcounty.org.