Sculptor James Tyler doesn’t have a big head, but he does create them.

Inspired by the giant stone, clay and ceramic heads found in ancient cultures, the New York artist has unveiled more than 30 giant head sculptures at public parks, universities and sculpture gardens around the country.

His latest effort, Brickhead Orisha, is currently on display through Dec. 31 at the Coastal Discovery Museum at Honey Horn. The sculpture is one of 19 exhibits in place for the 2015 Public Art Exhibition, a bi-annual event presented by the Community Foundation of the Lowcountry.

“All of the Brickhead sculptures are representations of humanity, making some statement about our presence on the planet,” Tyler said. “I tend to represent humankind as a single entity, not something broken down by race, gender or other things.” 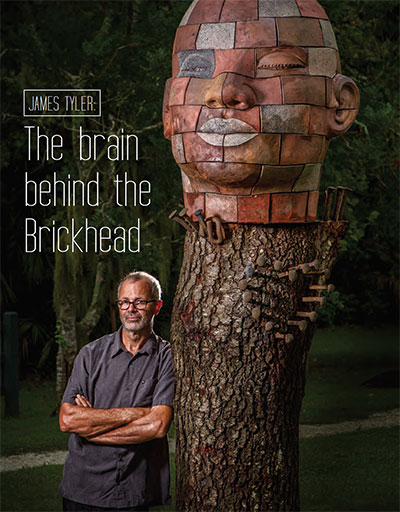 Tyler hand-sculpts each head in clay sections, which are then taken apart, kiln-fired into bricks and reassembled. The bricks have a natural ceramic finish. Variation in color occurs during the firing process. Each Brickhead is handmade and unique.

Some sculptures are specifically commissioned and are site-specific. Others, like Brickhead Orisha, start off as partial sculptures and are later combined with objects from a specific location.

“The head I brought down here is one I made a couple of years ago and put aside, knowing I would eventually find the right place for it,” Tyler said. “When this project came up, I thought it was perfect with the Gullah history and the rich history of the island. It just seemed like a natural fit.”

Tyler attached the head to a local tree trunk acquired through an area landscaper.

“Many times I treat my own pieces as found objects and make assemblages out of whatever I can find, similar to what a folk artist would do,” Tyler said. “It was difficult here because there isn’t a bunch of stuff just lying around … (Brickhead Orisha) is a statement about humankind and the impact we have on nature, both the world as a whole and specifically here on Hilton Head Island.”

Tyler received his master’s of fine arts from Hampshire College in Massachusetts in 1975. Previously, he studied at Herron School of Art in Indianapolis.

He began his art career working with bonze and carved wood but soon grew tired of the patience and repetitive steps required with those mediums. Eventually, Tyler gravitated to clay. A pivotal moment came when he moved his studio to Haverstraw, New York, the historical home of modern brickmaking. While touring the local brickmaking museum, Tyler suddenly realized clay didn’t have to be small and fragile.

“Most of New York City was built with bricks that were made in Haverstraw,” Tyler said. “Those brickmaking companies were digging clay out of the riverbank of the Hudson, just like me. I realized if the Empire State Building can be made out of a ceramic material, my own limitations were self-imposed. Ceramics can be used in other ways. That’s when I started the larger Brickhead series.”