'YOU CANNOT TAKE MY LIFE'

Sometimes, she changed shirts and wore slippers while reclining in what she equates to “medical lounge chairs” as chemicals coursed through her body, devastating the cancer within her.

But afterward, she’d lace up her Mizunos, and run the two miles to her Savannah home, making it four miles for that chemo session—because she’d also run to her treatments.

The workers thought she was crazy, says Wade, 42. “But I think people do kind of crazy things when they’re going through challenging situations.” 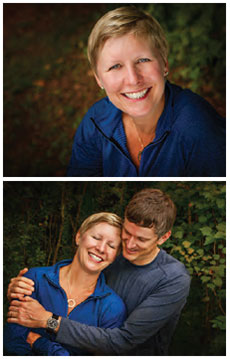 She felt slightly disoriented, but the real effects of chemotherapy didn’t kick in for three to four days, and she only ran a few miles.

But fast-forward two years, and Wade, cancer-free, still runs. She lapped the miles with a friend last month for the LoCo Motion race against breast cancer, running 30 miles over the three-day stretch on Daufuskie, Callawassie and Hilton Head islands.

But her mantra for that earlier time, “Running thru chemo” displayed even on her running shoes, meant running more than just a few miles to treatment. “It was the one thing I could do on my own terms,” Wade says.

Having cancer, you feel very out of control, she says. But she could control her running. And by logging long distances, she carved out space for comfort and contemplation while battling fear and anxiety about cancer. “I like to do things my way,” says the self-proclaimed control freak.

Wade’s way meant wearing a shirt that read “Suck it, cancer,” during one race, and it also meant that Wade kept her plan to run a marathon. Despite breast cancer, Wade’s way had her charging through the Boston Marathon qualifying barrier that keeps slowpokes out with five minutes to spare — two weeks after her diagnosis. In April, she ran the full Boston Marathon.

“There’s this impression that when you go through cancer and go through treatment, everything has to stop,” Wade says. “I think you can still be well.”

She’s a lawyer, wife, mother of three and an elected official, serving on the board for the Savannah-Chatham County Public School System. The busy woman doesn’t think she could have easily said, “I’m out.”

She was very much in, and planned to step into her 40s with flair — “40 and fabulous,” in other words.

But not even a week passed before she checked off her first now-that-you’re-40 mammogram, which brought bad news. The screening found what was undetectable by self-exam: breast cancer. Doctors also found cancer in her lymph nodes during surgery to remove her left breast.

“Life can turn on a dime and change dramatically,” she says. And Wade knows she’s not the same superwoman she was before cancer.

“I don’t think that I’ll ever be that person,” she says before laughing. “It beats the alternative.”