A STAR IS BORN

For many actors, the road to the stage is long and winding, with twists and frustrations and pitfalls at every turn. It’s a struggle you see time and again when you read about how Broadway stars slaved away waiting tables and doing bit parts in commercials for years waiting for their big break. Most of the time, raw talent is never enough.

Harrison Leahy, however, proves that sometimes it is. 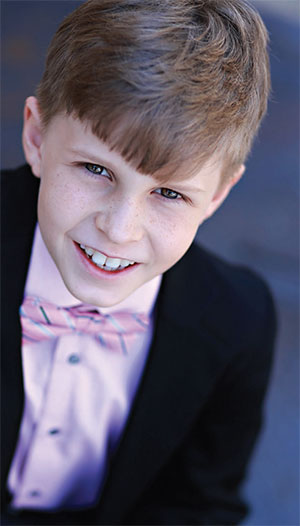 “I first started just singing as I’d walk down the hall or in the shower, just making up my own songs,” Harrison says. “One day my mom asked me ‘How about being in a show?’ My response was ‘No, no, no.’ But she told me it was going to be OK, we auditioned, and I loved it.”

That audition was for “Holiday on Main,” performed by Main Street Youth Theatre. From that first tiny part in a local production, Harrison’s path took a Broadway arc: small parts turned to solos, and roles in bigger shows soon followed: “School House Rock” and a part as the Clarinet Boy in “Gypsy.” Soon after, he took his talents to the Big Apple, making his mark with the Broadway Dreams Foundation.

And finally, after all that, came his first role as a professional actor in a big-budget tour. But what makes this phenom’s arc truly remarkable?

For starters, he’s only 9 years old.

As if that’s not enough, this isn’t some dinner theater tour: Harrison can currently be seen as Chip in the international touring company production of Disney’s “Beauty and the Beast.”  Yeah, that “Beauty and the Beast.” The one that’s brought in $3 billion since the Broadway production launched in 1994. And what’s more, the journey that led him there took just under a year from when his mom first talked him into that Main Street Youth Theatre audition.

“I haven’t really have a chance to process it,” he said. “I haven’t thought about it. Shows just went from being a 30-minute ride in the car to a 12-hour flight. It’s so weird.”

When we spoke to Harrison, he’d just returned from China, enjoying a state-mandated two-week sabbatical at home before he’d be allowed to return. His mother, Stacey, accompanied him for the leg of the tour that wound through Macau, while his father, David, had just tagged in for a stretch through Taipei.

“What’s interesting is that in China, the audience reactions are different. They’re sitting down most of the time. There are no standing ovations, but they are really loud,” he said with a chuckle.

Seeing as one show was held at the Venetian Macao’s Cotai Arena, which seats 15,000, you can imagine the volume.

And if the shock of going from Main Street to the world’s biggest stage in just under a year wasn’t enough, there’s also the culture shock of simply being a 9-year-old boy in China.

“On the streets, they don’t even know I’m in ‘Beauty and the Beast,’ they just know I’m a child with blonde hair, and they go crazy. One dad wanted to make his kid hold my hand and take a picture. My mom took a picture of that, and as I’m looking in the background, I see someone else with their iPad out taking a picture.”

After his two-week break is up, Harrison will return to Taiwan, then it will be on to the Middle East for a run through Dubai, followed by a trip around Europe to wind up the tour. You know, your typical 9-year-old experience.

And while it’s intriguing, it’s hardly surprising that Harrison’s rise to stardom has been so rapid. He gives immense credit to his vocal coach, Nancy Fontana, but with one conversation, one quickly sees he gave her plenty to work with.

One also quickly sees that despite the meteoric rise, Harrison stays immensely grounded thanks to a loving family, and that the world is still only beginning to discover his talent.