THE FUN-LOVING HILTON HEAD ISLAND NATIVE TALKS ABOUT HIS TV SHOW ‘SOUTHERN CHARM,’ THE CHARLESTON TRAGEDY AND HIS LACK OF A 5-YEAR PLAN.

So you think you know reality TV star Shep Rose?

Actually, there’s a good chance you do.

The 35-year-old lives in Charleston now, but he grew up in Sea Pines, attended Hilton Head Preparatory School and returns home frequently to visit family and friends. 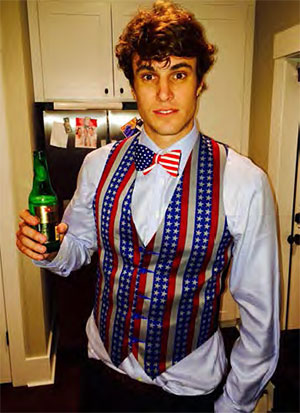 To many locals, he’s just one of the guys sitting at the end of the bar at Mellow Mushroom. But for many fans of the Bravo TV show “Southern Charm,” he’s THE guy. The show has developed a cult following after two seasons and Shep’s “hakuna matata” lifestyle has made him a fan favorite.

Monthly recently contacted him to get his take on the show, what he’s been up to and his thoughts on the recent tragic event that took place in Charleston.

Question: First off, how is the Holy City holding up? How have things changed there following the church shooting tragedy?

Answer: I think it's been remarkable how Charleston has reacted. There's been an outpouring of grief, sympathy and support. And really no violence. Anyone with a brain knows that racism exists, and as much as I'd like to see a utopian society, it's an impossible goal because of ignorance and hate. I'm proud that Charleston rose above the pitfalls of violent reaction.

Q: What were you doing when all of that was happening?

A: I was in a taxi passing the crime scene almost immediately after it happened. There were police everywhere. I have a friend who lives in that neighborhood, I called her to see if she was OK and she had SWAT team all around her house. It was crazy and scary. We slowly found out through various sources. I hoped the numbers were wrong, but tragically, they were not.

Q: Do you have any connections to the church or any of the victims involved?

A: Not personally. I'm an investor and frequenter of the Alley (a bowling alley and bar in town) and we have an employee who lost three family members, so that was devastating. It just felt so close and harmful for many Charlestonians. It's a tight-knit city.

Q: What was going through your mind as all of that was unfolding?

A: There was definitely some anger, that this racist psychopath came to our city to commit this massacre. But then there was so much unity. Apparently his goal was to create a race war, and he failed.

Q: The last time we talked, it was just before the premiere of Season 1. At the time, you weren’t sure how “Southern Charm” was going to be received. Now, after two seasons, how would you describe the reaction?

A: The reaction continues to surprise me, people really like the show. Either people watch it and like it, or don't watch it and are indifferent. Either way is fine with me. I get no negativity thrown my way, thank goodness.

Q: Would you say the show changed your life for the better?

A: Definitely for the better. I mean, I'm out in L.A. right now meeting with different networks about some ideas that I have. It's amazing and surreal. Life is good. And people send me clothes sometimes, I hate shopping, so that's pretty cool and convenient.

Q: There are rumors that there will be no Season 3. Can you speak on that?

A: Not really. There are some talks underway, but nothing definitive.

Q: Since filming of the last season wrapped, how have you been keeping busy?

A: I'm just making sure that the ship that is my life is on course. Tending to my current ventures, getting involved in a couple of new opportunities. Writing a lot.

Q: When is the last time you made it to Hilton Head?

A: It's been several months. I need to get back, it’s always relaxing.

Q: Do family, friends or acquaintances treat you any different?

A: Not at all, that's why I enjoy being with them all so much. I like giving and receiving grief, and that's what typically happens. But I also like meeting new people. I think I'm pretty easygoing, so I've really yet to experience many interactions that aren't completely copacetic and pleasant.

Q: Was there anything in the first two seasons you wish you could take back or do over?

A: I don't really look back very often. I wish my relationship with Craig (Conover) didn't appear so antagonistic and acrimonious, because it isn't that way at all. We yell at each other all the time, but that doesn't mean we aren't close. I was rough on my little brother growing up as well, until he got bigger than me. Now we never fight. (laughs)

Q: Are you still friends with Craig?

A: Yes, we are definitely friends, and yes, he still drives me nuts sometimes.

Q: Do you know if he passed the bar exam?

A: I'm not sure about that. You'll have to ask him.

Q: Were you actually jealous when Craig got a higher bid at the charity auction?

A: Half-drunk and competitive would explain my disposition at that moment.

Q: Did you vote for Thomas (Ravenel) in November’s election?

A: I would have but I'm currently registered in Hilton Head. It’s strange that they make it difficult for citizens to vote. I would say that it's potentially conspiratorial on the government's part, but that would be giving them too much credit. They're way too dumb, lazy and divisive to accomplish anything.

Q: Did you think Thomas had a shot to win the U.S. Senate seat?

A: Not particularly, but I admired his enthusiasm and shared many of his beliefs.

Q: What can you tell us about the status of Thomas and Kathryn’s relationship?

A: One never knows. I know that they love their daughter and she is little beauty. I wish them all happiness.

Q: Was it just good editing or was Thomas and Kathryn’s relationship really that dramatic in real life?

A: It can be dramatic sometimes, no doubt. But I surmise if you put other couples’ relationships in front of a camera, you might see some interesting altercations.

Q: Whitney claimed Kathryn only had a baby to stay on the show. What do you think about that accusation?

A: There's no way I could know what is going through someone else's mind. I hope that isn't true.

Q: Your relationship with Cameron is hilarious to watch. Is she your voice of reason at times?

A: I had dinner with Whitney, Cameron and her husband last night in L.A. We had a hilarious time needling each other. She and I lean on each other for advice all the time. We talk several times a week.

Q: Who (from the cast) were you friends with before the show started?

A: Landon is the one I've known for 13 years. Most all the others are friends via the show, but we've become close very fast.

Q: Does the “Southern Charm” cast hang out off camera?

A: Definitely. A producer last season was whining about it because they don't have cameras on us all the time. When we all hang out off camera, things are said and fun is had, and it's all happening on the fly, so they must adjust quickly to our co-mingled lives. Whereas the “Real Housewives” apparently don't hang out at all unless filming, so they're easier to deal with and predict.

Q: What are your plans for the future?

A: My 5-year plan is to never have a 5-year plan. Tomorrow is promised to no one.