BLINK, AND YOU MAY MISS IT. “IT’S A REALLY FAST TRICK,” SAYS BRANDON ATKINSON, 28, OF HIS SIGNATURE MOVE.

The skateboarder calls it a “Boneless Big Spin Rock to Fakie.” That’s when he skates uphill, drops his foot, pops up his skateboard and spins before rolling downhill.

“It’s one of the big eye-catchers,” he says.

But Atkinson an even more impressive move: helping others who are struggling — be it with sports or life in general.

“He’s a very, very, good positive person,” says professional BMX rider Brandon Hopkins, who toured with Atkinson. “He helped me out a lot.” 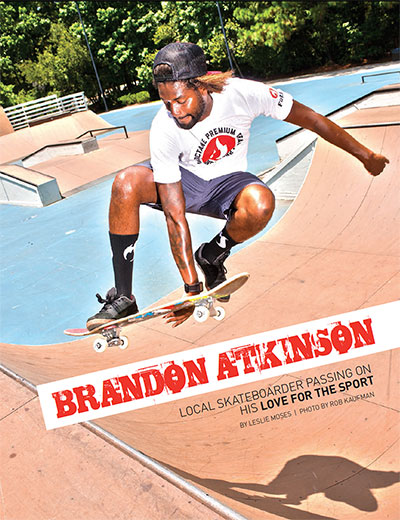 “I think you always have to keep your head up, and keep going forward,” Atkinson says. “Then other people feed off that.”

Early on, Atkinson learned how to fall, a lesson the Hilton Head Islander now teaches his students.

It’s kind of like geometry, says Atkinson, who also manages a Fuel Clothing shop and showcases his moves on tours.

Skateboarders must analyze the angle of their descents, know which shoulders to tuck, and decide if they need to leave their knees out, depending on if they’re wearing kneepads.

Parents are sometimes horrified by spills. “But the kid is absolutely fine,” Atkinson says. “You just get up, brush your shoulder off and keep skating.”

He can talk. He’s suffered cuts and bruises and been sidelined for a few weeks, but never broken a bone in 20 years of skateboarding.

The New Jersey native spent almost every summer on Hilton Head, where his grandparents bought a home, before he moved here himself six years ago.

Hilton Head may feature bumpy, seashell-studded concrete, but it’s also home to a beloved skate park where Atkinson sweated out his summers.

He trained at the Bristol Sports Arena as a teen, long after he graduated from the first skateboard that his mother bought for him from KB Toys.

You’d find him at Bristol with a lunch-packed cooler from noon to 6 p.m., “like, every day,” Atkinson says. “That’s a special spot.”

“Sometimes, it felt like skateboarding was easier than walking,” he says. “It just felt natural.”

He toured nationally, demonstrating his skills — once performing, impromptu, in a hotel lobby, Hopkins remembers.

“Brandon is very passionate about skateboarding,” he says.

But Atkinson is just as ready with encouragement, which he learned from his grandfather while playing golf.

“If people around you are happy, it makes the day a lot easier,” Atkinson says of his grandfather’s wisdom.

And if they’re not happy, Atkinson lends his own optimism.

It gets lonely on the road, but Atkinson was always the person to try to spark happiness, Hopkins said. When Hopkins was going through a divorce, touring was hard on him. But Atkinson pointed out a bigger purpose for the pain.

“Every time I turned around, Brandon was there,” Hopkins says.

It’s a mindset, according to Atkinson. Being full of faith, passion and happiness means overflow.

“It will drive the person next to you,” he says.