Perhaps the biggest sign that Dominique “Niki” Antunez is a gifted artist is that she’s decided not to pursue a degree in fine art.

“I like painting too much,” said the 2015 Hilton Head High School graduate. “I want it to be something I can relax with, something I can zone out the world with. If it’s required, there’s a whole other aspect to it. It’s something you have to do instead.” 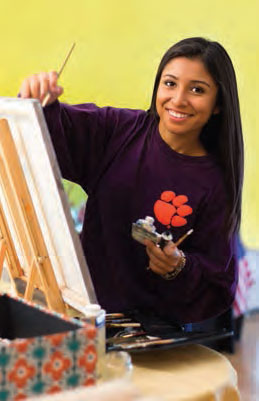 Those who know about her talent need not fret, however: Antunez will be headed to Clemson University this month to start working toward a degree in architectural design. “I think it’s somewhat similar (to art),” said the 18-year-old Hilton Head resident, who hopes one day to use her artistic eye for design to create environmentally friendly urban spaces.

It’s a dream that’s coming true a bit ahead of schedule, thanks to several scholarships — including the VanLandingham Rotary Scholarship, worth $10,000 — Antunez scored this year because of her talent and ambition.

“We were thinking I might as well do University of South Carolina Beaufort for the first two years and then move on to Clemson next,” said Antunez, who was born in Mexico but moved to Hilton Head with her mother when she was 2. “Luckily I got the VanLandingham Scholarship, and that’s made a world of difference.” 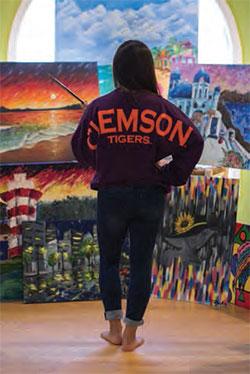 That scholarship came on the heels of another honor — or, rather, five honors — for the budding artist. She took home five Gold Keys, the top award, in the regional 2015 Scholastic Art and Writing Award competition. For a girl who never really painted before high school and had only dabbled in art for fun as a kid, having five award winners out of the nine pieces she entered was more than a pleasant surprise.

“That competition goes to New York for judging, so for those people to look at my artwork and have them say, ‘Yeah, that’s a Gold Key,’ that’s a big confidence booster,” she said.

She’s also proud of having earned an IB diploma with a weighted GPA of 4.56, all while working part-time at her family’s restaurant, Hilton Head Diner. The mid-island staple is where her mother, Edelia Tsironis, met and fell in love with Antunez’s stepfather, Nick Tsironis Jr., more than 10 years ago. The two were married when Antunez was 6. 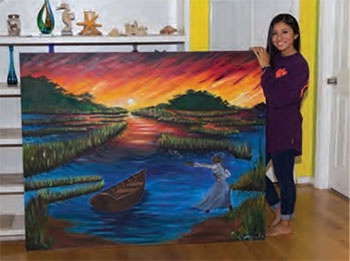 “Not many people get to witness their parents’ wedding, and I’m blessed that I got to be a part of that,” she said. Antunez now has an 8-year-old brother and a 7-year-old sister, and she says she still speaks Spanish at home with her mother.

Though she’s excited to start this next leg of her life’s journey, Antunez is already waxing nostalgic about the island she’s called home for most of her life.

“Growing up I kind of took it for granted. But the more I traveled the more I talked to people about growing up, and people are always amazed that I live five minutes from the beach and we go every day,” she said. “That’s definitely something I’m going to miss.”