JESSICA GELTZ NEVER IMAGINED HERSELF A CREW COXSWAIN UNTIL SHE WAS RECRUITED IN LINE AT PANERA BREAD.

“I love being in the water, I love the tradition of the sport and the camaraderie that comes from giving it everything you have inside you,” Geltz said. “Crew takes the idea of teamwork to a whole next level. There has to be perfect synergy in the shell to lead to a win.”

At 5-foot-1 and 95 pounds, she has the prototype build for a coxswain, the leader of the rowers who steers the shell and motivates the crew during a race. Hilton Head High crew team coach David “Coach E” Erdman saw it immediately when he bumped into Geltz at Panera. 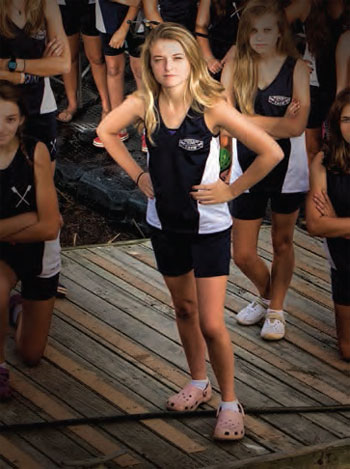 “I’m with my dad and all of a sudden I hear this guy say, ‘You’re short. You’re light. Can you yell? You should join crew,’ ” Geltz said. “I didn’t choose crew, it chose me and it’s been a perfect fit.”

But she said her true breakthrough came when a transfer student named Gracie Anderson joined the team two years ago. Anderson, now a rower at Northeastern, had been to many regattas and seen crew at its highest level and pushed Geltz to be better.

“She made me realize that even though I’m not rowing, I have to leave everything out there physically and mentally or the team won’t follow me,” she said. “I worked at it, I found my cadence in yelling and in prompting the team and I earned their trust.” The team started winning under her leadership during her sophomore year and has continued to excel.

“To a spectator, it probably just looks like this little girl yelling constantly, but I modulate with the conditions of the race,” she said. “I’m softer when we just need to be in sync and I’m crazy when we need a huge push. I move my voice with the boat.”

Geltz has trained for a week each summer at the U.S. Navy Summer Rowing Camp, where top athletes learn alongside top collegiate coaches. She said the discipline and structure of the U.S. Naval Academy in Annapolis, Maryland, feels like a perfect fit, and has been accepted as an official candidate for the academy. She plans to take a gap year after school to perform service projects both in the U.S. and abroad before applying officially in 2017.

“I’ve always wanted to serve, I just didn’t know what form that would take. But this feels right,” she said. “They have an amazing crew program and it will allow me to see if I can compete at the highest levels.”

Jessica Geltz says she has two favorite crew exercises she has learned in her time with the Hilton Head Island High School crew.
The first is called “cut the cake.”
“You take a stroke, and then every other stroke, you flatten the oar out, parallel to the water, slide in the seat back and forth, almost icing the water, then you take another stroke. It helps with everyone’s timing and gets everyone in sync,” she said.
She picked up her other favorite exercise during crew camp at the U.S. Naval Academy: a drill called “fly like an eagle.”
“We’re sitting dead in water, then we take a couple strokes and then I call a power 10, where I call out numbers one through 10 and they have to give every bit of power they have in them,” she said. “Then we stop dead again, slam the oars on the boat parallel to the water, put the foot on top of the oar and put your hands out like you’re flying. To pull that off, there has to be perfect synergy on the boat.”