Marley Maiers grew up fishing and crabbing off the Jersey shore, but had never aspired to make her living on the water. Sometimes, though, you can’t resist the beauty of the beach, the pull of the tides — or the entrepreneurial spirit of the water-loving man to whom you’re married.

Her husband, John, who had been a clammer in New Jersey and had worked on ocean-going boats in Maryland, had already been putting his captain’s license to good use by leading sailing tours on the 45-foot Morgan sloop Cheers when the owner of the Tammy Jane approached them two years ago about buying his boat and taking over his business. 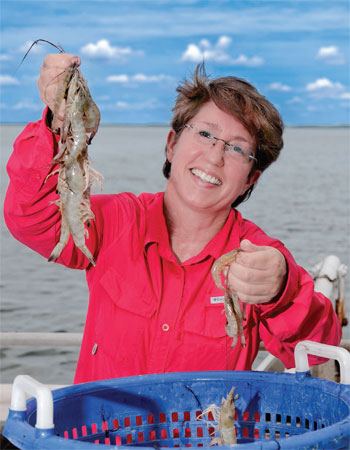 “I said no a first time. I said no a second time,” says Maiers, who’d spent 25 years working in the tech industry for Fortune 500 companies, the New York Stock Exchange and others prior to moving to Hilton Head in 2004. “The third time, we were sitting at the table closing on the Tammy Jane. But that purchase allowed me to quit my full-time job and jump full on into charter boating.”

“It’s the best job I’ve ever had,” says Maiers, 48, who married John, 62, in October 2003 and moved to Hilton Head in March 2004, eager for warmer climes and a slower pace than where she’d been working in Manhattan. “It’s really special because you get to entertain people, you get to educate people, you get to be involved and entangled with our environment and our quality of it in a very direct manner, which I find very rewarding.”

John Maiers, along with a handful of others, mans the boat while his wife does the talking.

“Basically, I’m the show. I do the show,” she says. “The show” is three hours long and includes a discussion on their way out of the docks — the Tammy Jane docks near Hudson’s Seafood House On the Docks — about everything from spartina to everything they’re likely to bring up in the nets.

“I always end up talking about food, one way or another, because everybody gets eaten by somebody, including us chowing down on shrimp,” she says.

Once they reach a good spot for shrimping, they drop the net and trawl for 15 to 20 minutes. Then the excitement spills over when the net comes up and those on board get to see the wriggling fruits of their labor. But the harvest is still not the point, says Maiers.

“The shrimping part of it is a smaller part of what we do,” she says. “It’s more of an opportunity to educate people about Port Royal Sound, the environment, and where your food comes from.”

Marley Maier’s shrimp pro tip: “The No. 1 problem people have is that they overcook the shrimp. Separate it by size, cook the big ones first, and take them off the heat as soon as that flesh starts to turn white. By the time you get the plate out, they’re cooked.”

For more information on shrimping with the Tammy Jane, contact them at 843-384-7833 or tammyjane.com.