She and her husband, both from Kansas, were married on the island 15 years ago and set a goal to eventually move here.

The “where” was established. 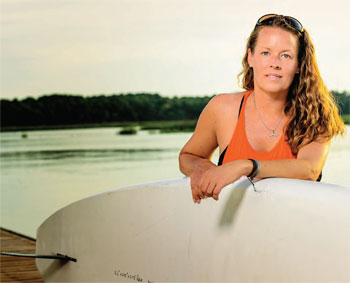 The “what” came later on a family trip to Hawaii.

“That’s when stand-up paddleboards were just starting," she said. “We rented a board for the family in a small body of water. It’s was one of those things that you sat on it and knew you would do it later, especially with our dream of Hilton Head."

The Feltners moved here full time five years ago and Holly Feltner hasn’t been away from her paddleboard since. She was a paddleboard instructor for Outside Hilton Head before landing a full-time job as a naturalist at Disney’s Hilton Head Island Resort.

“Paddling goes beyond ‘like,’” she said. “My husband calls it my addiction, but I ask if he would rather I be addicted to anything else.”

She tried kayaking but prefers her SUP: stand-up paddleboard.

“With paddleboarding, there is more exercise,” she said. “There are a lot of similarities with kayaking in paddling technique. But balance is the issue with everyone.

Everyone starts out with a lot of fear, but everyone returns with confidence, whether it takes 10 minutes or two hours. Once you fall in the water, you lose that fear factor. Falling in is a good thing because it lets everything go so then you can relax. Being wet is the worst thing that’s going to happen to you.”

She said she taken people paddling from ages 2 to 85. “As long as the instruction is good, everyone can do it.”

The only deterrent is the wind. 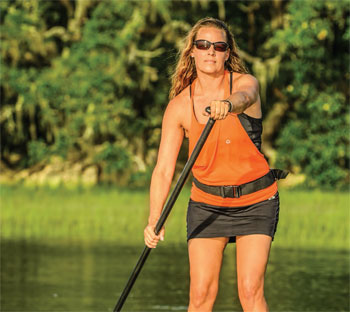 “Your body is like a sail,” she said. If winds are above 10 mph, she’ll postpone her paddling plans to another day.

Some of her favorite local paddling sites are Broad Creek. Launching from Shelter Cove, she’ll paddle from Old Oyster Factory to Palmetto Bay Marina with a stop at a local restaurant for lunch. She also likes the new city dock in Skull Creek. It has a low dock that makes it easier to launch and it’s right across from Pinckney Island.

She said her pace is steady, not speedy.

But that will change this summer.

“I signed up for a 30-mile race in October so I’ll start training in July.”

But regardless of her pace, she knows she‘ll enjoy the scenery.

“I‘ve seen just about every creature — manatees, dolphins. They‘re just as curious as we are and will swim right up the board or kayak."

They might just have to swim a little faster this summer.

●    Beginners can start paddling on their knees, then stand up when they feel more confident and comfortable. It often only takes an hour or so.
●    Dogs like SUPs, too, but it might take a few short trips for them to get used to it. (Feltner discovered that an 80-pound dog launching into the water without warning likely will prompt the paddler to take a short swim, too. She trained her Chesapeake Bay retriever to stay on the board unless given permission to jump in the water.)
●    Whatever you can do in a gym, you can do on a SUP: yoga, situps, pushups, swimming (lay on the board and use your arms rather than a paddle).
●    Most boards are light enough for a woman to handle. Feltner can load and unload her 12-foot-6-inch board by herself.
●    Make sure you stay safe. Factor in tides, oyster beds and wind. Paddling is not recommended as a solo sport. If you do go out by yourself, let someone know of your plans.