CAPPY THE CLOWN HAS SOMETHING FOR THE CHILD IN ALL OF US.

If you’ve been to any event on Hilton Head Island where there was even the slightest chance that children would be present, odds are good you’ve seen Cappy the Clown.

And if you’ve seen Cappy the Clown, you know her trademarks: the big red chair, the impressively complex Gordian Knot balloon animals she makes, the Boston accent, the quick wit.

And if you’re reading this hoping to find out more about the real person behind this island institution, you’re out of luck. Turns out, to paraphrase Samantha Bee, when you peel back those layers of Cappy the Clown, you just end up finding more Cappy the Clown. 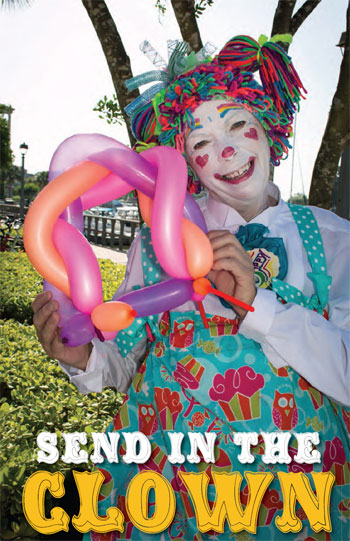 There is a person behind the face paint, to be sure. But in this case, Cappy simply wanted to talk about Cappy when I spoke with her recently. And even though the journalist in me wants to give you Cappy’s “real” name and backstory, the kid in me just wants to play along.

Besides, part of Cappy’s charm is that she feels more “real” than most clowns. The bright wig, the baggy trousers, the big red nose, they’re all there. But when she’s performing, entertaining children as she has for more than 25 years, there’s no attempt to put on a goofy clown voice. There’s no over exaggerated motions or hammy reactions. She’s not projecting to the back of the house, she’s putting on her full performance for the sea of young faces right in front of her.

If you ask a question of Cappy or of the person behind the face paint, the voice that responds comes from the same place, carries the same unabashed “pahk the cah” Massachusetts lilt.  It’s hard to tell where Cappy ends and the “real” person who inhabits the character begins, or truly which one is the real character.

So we’ll simply start by saying that Cappy the Clown’s journey to becoming Hilton Head Island’s preeminent clown starts, improbably, on a tall ship out of Boston.

“It was just like a fairy tale for me. You see these stories about sailing on moonbeams or whatever and I got involved with them sailing on a vessel called Shenandoah for Windjammer Vacations. I loved it; the captain taught me a lot,” she said. Cappy served her time at sea, traveling from the West Indies to the Gulf of Mexico and countless points in between.

After Shenandoah shipped off for another six months, Cappy pointed her sails south, landing in Hilton Head Island and looking for work at marinas. A sprained knee left her landlocked, and with no way to steer a ship, Cappy decided the next logical step was to go to clown school.

“I told a lady I knew on the island, ‘You know, I think I’ll go to clown school,’ and she said to me, ‘I know a clown down in Fort Lauderdale, Florida.’ I called her up, went down and trained with her and here we are.”

Having made the leap into clowning full time, Cappy started working the festival circuit around the island, becoming a fixture at regular events like HarbourFest. The in-person clowning led to the launch of her own show on WHHI, something she’s eager to reboot in the coming years. But as much fun as Cappy had projecting the full clown experience out into the broadcast ether, she’s still enamored with the personal connection she makes performing live.

“I have a friend, Ash Christian. I met him when he was very little at the Marriott. I used to see him there. I actually gave him a magic trick. He recently tracked me down on Facebook and told me he still has that magic trick. And he’s a big movie producer in New York and California … It just makes me feel so proud.”

So does it matter if Cappy isn’t “real?” Does is it matter if her driver’s license presumably lists a different surname than “the Clown?” Ask the kid who just saw a balloon transform into a beagle right before his eyes. I know what they’ll tell you.