The scene lacked a hero.

The answer, no, would be seen this summer, the library board of trustees announced. That’s when the 10 hours added at three branches — Bluffton, Beaufort and Hilton Head Island — would again be cut, following earlier cuts in 2011.

But then Ray McBride walked in with more than 18 years of library experience and a plan: Let’s take another look at the budget.

The well-dressed businessman wanted time to see if the libraries could postpone or eliminate some — or all — of the cuts.

“We thought that was a logical thing to do,” said Bernie Kole, chairman of the library system’s board of trustees. “We said, ‘We’d love it if you could.’”

He could. “I think we can do everything we need to do with our existing budget—and not reduce hours,” said McBride, the new director of the Beaufort County library system. 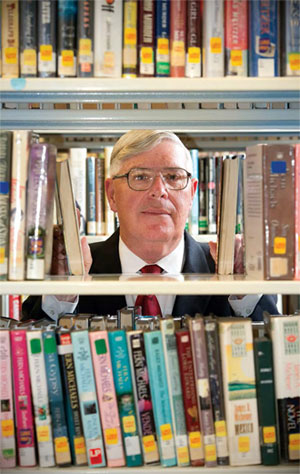 “I’ve been very impressed with him,” Kole said.

With the same analytical mind that McBride used to sift and relay information to the president of Honduras during his days as an intelligence analyst, he listened and honed in on issues within the local library system.

One red flag: Fifteen vacancies needed to be filled.

“Being from outside the system, I have a clean view,” said McBride, past president of the South Carolina Association of Public Library Administrators and the South Carolina Library Association’s public library section.
But he also carries a book-smart view as a former insider in library systems of Darlington, Greenville and Florence counties.

He reviews 25 nonfiction books each year for Scarecrow Press, but McBride also is library book smart in a street-sense way. He knows trends and what works.

And sharing books and materials with out-of-town branches expands the local collection from 335,000 to 3.5 million items.

But customers can receive text messages when their ordered items arrive at a local branch via the S.C. Lends system. McBride was among the pioneers of that statewide sharing system.

Libraries must be run like businesses, but often, they’re not, McBride said. There must be a return on investments, and the public should get the best use of their tax dollars, including services they demand.

For instance, are current library hours appropriate at each branch? McBride is concerned with variations, not cuts. Should doors open earlier at the Lobeco branch, or close later at the St. Helena locale?

“I think the community should have some input in that,” McBride said.

He also likes using libraries’ spaces efficiently, which sometimes means going digital. A 2013 reference book, for example, hogs shelving, but a 2015 online subscription available to the public works best. Once outdated books have been replaced with online resources, the space they once occupied on the shelves can be repurposed. That’s what McBride did in Florence, creating a 1,200-square-foot art gallery for the community.

And librarians? “Get out from behind the desk,” said McBride, who believes in helping people search for materials online.

“That was something we were looking for,” Kole said. “That was very important.”

But it’s McBride’s military experience that made him keen on trials and comfortable with urgency. McBride was one of the youngest sergeant majors in the U.S. Army, and he moved every three years. He faced fresh challenges with limited time to put his stamp on projects.

“You’re constantly starting over,” said McBride, who lived in Germany and Japan during his time in the service.

For the record, the McBride family, who has lived in 27 houses in the last 42 years, plans to stay. He and his wife chose the Lowcountry as their long-term home after seeking out coastal living near their son in Savannah.

Though he has settled down now, his short military stays helped him hone a proven formula: Management by objectives. Sets goals, in other words, and work logically to obtain them. “Ninety-nine percent of the time, that will serve you well,” McBride said.

He was not aware of controversy between county administrators and library trustees when he heard about the job. Nor did see an ax poised over the libraries’ operating hours.

“I quickly realized that there was some issue here,” McBride said. But no problem. “I like a challenge.”