Genia Edelman of Hilton Head Island has a career and social interests that span both sides of the continental United States.

Edelman is executive vice president for sales and marketing at The Africa Channel, a television network based in North Hollywood, California. Back on Hilton Head, she runs the Hilton Head Beach Volleyball Academy, which has 12 teen-aged girls in the recreational program.

The girls, who range in age from 12 to 16, train three days a week at the beach volleyball courts at the Holiday Inn Resort Beach House near Coligny Beach. They also use new courts built recently at the Providence Presbyterian Church off Cordillo Parkway on Hilton Head and do strength and conditioning training at Conviction Training Facility on New Orleans Road. 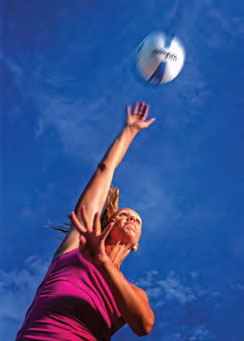 Edelman, who has been involved with local volleyball for the past five years, said the sport has been a longtime passion of hers.

As a collegiate volleyball player at Greensboro College in North Carolina and a lifelong athlete, she understands the benefits of athletics, especially in young adults. She said the girls utilize their dedicated training and proactive conditioning to prepare for various tournaments, both locally and regionally.

She also tries to get the girls as much exposure as possible to professional players and college coaches.

During the second week of June, the EVP Beach Volleyball Tour will be at the Beach House for a tournament. Spectators will not only see elite athletes compete on the sand for top honors, they will also have the chance to interact with the pros by participating in contests and promotions.

Thanks to the U.S. team’s success at the Olympics, beach volleyball has become increasingly popular, especially on college campuses. Sand volleyball is now an NCAA-sanctioned program. And as the sport grows in popularity, more opportunities have been available to young participants on Hilton Head.

Edelman said several volleyball coaches from the University of South Carolina will conduct camp clinics in June and July on Hilton Head.

“It’s good to bring in a lot of different people involved in volleyball to give them different opportunities to improve their game skills,” Edelman said. “It is also good for the girls to be seen by different college coaches for post-high school play.”