“I have lived on the island for 30 years and spent much of it as a fitness instructor and personal trainer, but the first time I did a downward dog position, I was just hooked,” Verechia said.

Then she discovered an even greater fitness high: beach yoga. Now, the New Jersey native is in her 13th year of teaching what she loves in the perfect location to spread the gospel, in front of the Tiki Hut at the Holiday Inn Resort Beach House every spring and summer on Mondays, Wednesdays and Fridays at 9 a.m. sharp. 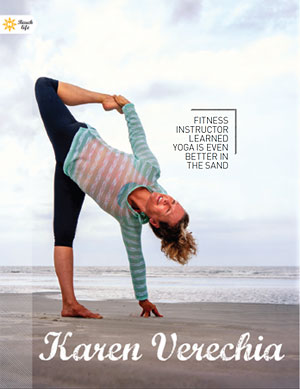 “I call it the big blue sky mind,” Verechia said. “When they first sit down, I have them close their eyes and listen to the ocean. The sand moves under you, and sometimes it’s hard, sometimes it’s soft. It’s the unexpected, and you’re on your toes for it. Being out in nature brings the quality of your attention into the present like nothing else.”

Verechia has long seen the benefits of yoga for the body and soul. After doing her yoga instruction training at the acclaimed Asheville Yoga Center under master instructor Stephanie Keach, she opened a yoga studio on Hilton Head Island’s New Orleans Road.

“Even as I built my business there, we would constantly get calls asking if there was any yoga on the beach,” Verechia said. “It clicked with me. We might be on to something here. Then when I actually did the yoga on the beach, there’s no going back. I said, ‘This is where I must be.’”

Verechia said the basics behind yoga are tailor-made to be done waterside.

“We’re asking folks to let go, to breathe and feel their breath, and the sounds of the ocean foster that letting go beautifully,” she said. “You feel like you don’t have a care in the world. When we’re looking at the sky, listening to the sound of the ocean, why would you want to be anywhere else? It’s a bucket list experience. And when the dolphins are playing near shore, you’d think I had them on the payroll, it’s just so perfect.”

After closing her studio, it took a couple years to build a beach-focused clientele, but return visitors helped spread the word. Now, along with friend and fellow instructor Marty Crocker, the pair have built a thriving business.

Beach yoga classes cost $10 and are available for all ages, all skill levels and visitors and locals alike.

“The local presence is picking up lately. They are catching on that they deserve to pamper themselves, too,” Verechia said.

Just bring a towel, sunglasses and a hat. Classes run from mid-April through mid-September, with about 10 students per class.

“It’s a unique experience and it creates a special memory, and we tailor the class to create that memory for little kiddies, grandmas, newbies and experts,” she said. “Every time I get out there, it feels new and fresh to me as a teacher. Sometimes it’s windy or there’s more insects, sometimes it’s cloudy or maybe even light rain.

“But life isn’t perfect, even on vacation. Life is all about the unexpected, but the benefits of soaking up the vitamin D, of going through the yoga experience the way they did it 5,000 years ago, it’s just a blessing,” she said. “I haven’t had one client through the years leave disappointed and they just keep coming back. Are you going to get sandy? That’s a straight-up yes, but it’s a $150 sea-salt exfoliation thrown in for free.”