Jim Lisenby came to Hilton Head Island 37 years ago looking for quiet and anonymity. Instead, he brought the whir of two blenders to Sea Pines Beach Club and made himself into a local legend.

“I came down here originally to write my book. I was living in Myrtle Beach and it was too distracting to try to write my book there. I’d met too many people in Myrtle Beach,” says Lisenby, who now has two books published, both on how to make the perfect frozen (and non-frozen) cocktails. “So I came here to get that book written, and I just never left.”

Lisenby has been serving his famous frozen concoctions at Pool Bar Jim’s at the Marriott Grande Ocean Resort for 21 years, but he’s been whipping up delicious drinks for decades longer than that. The Hamlet native did some bartending while at East Carolina University in Greenville, then eventually moved to Myrtle Beach, where he found a niche for himself as bar manager at the Hilton Hotel.

“They had bartenders from Chicago, Atlanta, Miami, Las Vegas, but they ran into a little problem with the mini-bottles. Bartenders just didn’t know what to do with them, and they were not accustomed to making frozen drinks or tropical drinks,” Lisenby says. “So I asked the hotel if I could give up my manager position and just take over the pool bar. It was a circular bar, and we mounted all this fresh fruit behind us. In the first year I took it over, we did more than 10 times they’d done the year before, and the next year we doubled that amount.” 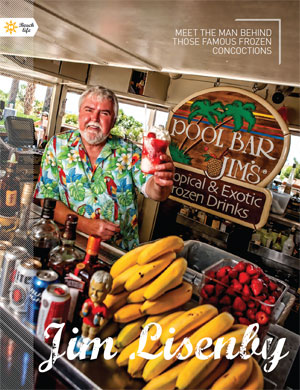 The demand for Lisenby’s drinks soon stretched beyond the bar, all the way back to vacationers’ homes across the country.

“One day some lady was standing there waiting for a drink, and in the time she was there I answered three phone calls from people wanting recipes,” he says. “She said to me, ‘If all those people wanted recipes, you might want to write a book.’ That’s where I got the idea to do something like that.”

Lisenby’s first book, “Pool Bar Jim’s Famous Frozen Drinks,” featured more than 200 recipes, including more than 100 of his own original concoctions. Lisenby leaves his latest book, “Pool Bar Jim’s Tropical & Exotic Frozen Drinks,” on the bar and lets customers pick what they’d like. He’s known for making his drinks not only delicious but generous; they’re often so big patrons get a second, smaller cup for the leftovers.

Before opening Pool Bar Jim’s, Lisenby worked at the Hilton Head Inn for a five-year stretch, and then ran a nightclub, Jim’s Paradise, at the Fountain Center at Sea Pines Circle for seven years.

Lisenby continues to do a brisk business at his current location, working 10- to 12-hour days seven days a week. But he takes three months off in the winter to travel, hitting his favorite Caribbean islands, among other hot spots. “That’s when I do all my drink research,” he says. That’s the best “working vacation” we’ve ever heard.