Hilton Head Island, consistently recognized among the top family beaches in the country, annually hosts more than 2 million visitors. Fortunately for both locals and visitors, Shore Beach Services employs highly qualified lifeguards, such as Taylor Smith, so that beachgoers can safely enjoy the island’s miles of sandy shores.

A native of Rice Lake, Wisconsin, Smith grew up enjoying the outdoors and being active in and around the water. Her swimming prowess garnered her a scholarship from the University of Wisconsin-La Crosse, where she served as the captain of the swim team while pursuing a double major in business management and Spanish. 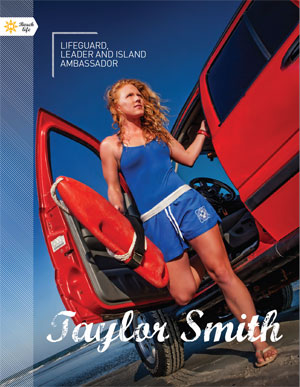 Smith made her way to Hilton Head in 2011 via swim team recruitment efforts by Shore Beach Services and worked as a lifeguard every summer while completing her studies. In May 2014, Smith graduated and took a short break before making Hilton Head and lifeguarding a year-round commitment.

Smith jokingly refers to her uniform as her “blue business suit” and says she never tires of seeing dolphins, but being a Hilton Head lifeguard is about much more than a passion for the outdoors and sitting atop a watch tower.

“The job is physically demanding, and not only because of the hours and ongoing training. We also handle beach rentals — we unpack all the chairs and umbrellas each day and repack them each day — and take lots of questions from visitors who ask about the weather, tides, wildlife, where to eat on Hilton Head, where to shop,” she says.

“I've been asked if we ‘steamrolled’ the beach or if the jellyfish are ‘biting,’” she says with a smile. “I've also seen some pretty unusual clothing and people fighting over sand dollars. We get every walk of life on the beach.”

Mid-March through mid-October is considered the main lifeguarding season, but the off-season also keeps her very busy.

“We spend time training, fixing equipment, painting, whatever needs to be done,” she says.

Smith has dominated many lifeguard competitions and has been the overall women's champ for the past two years in local competitions. In fact, she set the record for most overall points in 2014 and was named Lifeguard of the Year.

Smith was also recently promoted to supervisor, and she and a fellow lifeguard are preparing to kick off their new junior lifeguard program, which will include one-week summer camps where kids can learn about safety, life-saving techniques and more.

“We wear many hats. Beyond just being a lifeguard, we are teachers and tour guides. Hilton Head has been good to me and I like being an ambassador of the island,” she says.

Smith says she also loves working with a diverse people from all over the world and enjoys traveling, photography and reading — “Harry Potter” books are her guilty pleasure.