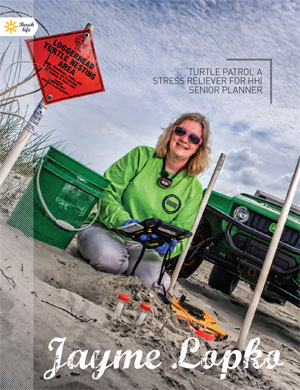 As a senior planner for the Town of Hilton Head Island and a member of the Hilton Head Island Sea Turtle Protection Project staff — lovingly dubbed “The Turtle Patrol” — protecting endangered species and conserving the environment is a way of life for Jayme Lopko. She joined the project a decade ago and has had a love affair with conservation work ever since.

“I've been doing Turtle Patrol for 10 years and I love it,” Lopko said. “It's a stress reliever for us to be out on the beach in the morning. In the off season — from October to May — I find myself being a little more stressed because I don't have that release of being out there. It's exciting every morning — listening to the waves, watching the sunrise, educating people, preserving the species — it's really something I just love to do.”

Funded by the Town of Hilton Head Island and managed by the Coastal Discovery Museum, the Sea Turtle Protection Project was founded in 1985 to protect the endangered loggerhead sea turtle. Lopko and other members patrol the beach for new nests, monitor hatching activities and inventory each nest after the hatchlings have gone. But that's not all they do.

“We're called the Turtle Patrol, but we do a lot of stuff out there,” Lopko said. “Recently, we had to rescue a bird with a broken leg. We got it off the beach and took it to a local vet. Another example, we recently had to rescue a freshwater turtle, a yellow-bellied slider that was out there, so we got him off the beach. We also help people get stingrays off their fishing line. So, we do a lot.”

When the hatchlings have left the beach, Lopko finds herself on the north end of our beach in the winter months to monitor piping plover populations to assist the Town Sustainable Practices Coordinator, Sally Krebs. These shore birds are listed as threatened on the endangered species list. The red knot shore bird will be added to these surveys this coming winter as they are also a threatened species.

While hatchling sightings are a common occurrence, spotting a mother loggerhead sea turtle is much more rare, Lopko said. Not surprisingly, some of her favorite Turtle Patrol stories involve catching a rare glimpse of a mama loggerhead.

“We look for the female's tracks on the beach — they're a good 3 feet wide, so they're pretty unmistakable once you've seen them,” Lopko said. “There's usually one set of tracks coming in and one set of tracks going out. On my third day on patrol, we only found a track in, so we thought we might get to see the mother. We went looking for her and found where she nested, but there were no tracks out and no turtle. We searched for a good 30 minutes — she'd actually gone up into a subdivision in North Forest Beach. We had to call the fire department and the police department to come out and help us load her into a trailer and take her back to the beach. It was a really exciting first few days on patrol.”

In addition to Turtle Patrol, Jayme assists with enforcing the Town's lighting ordinance, which brings her to the beach in the middle of the night. Sea turtle hatchlings are attracted to bright light. If your beachfront porch light draws them away from the ocean, disorientation occurs. The Hilton Head Island Lighting Ordinance requires that lights must not be visible from the beach from 10 p.m. to 6 a.m. May through October.