Chef Chad Newman of Sea Grass Grille spent part of his childhood on a 400-acre dairy farm in Michigan with two grandmothers who were fabulous cooks. 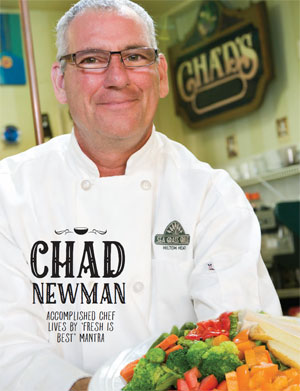 “We had huge gardens. Asparagus grew wild, we had green onions, apple orchards, corn on the cob in the fields. If we needed something, we went out in the garden and got it,” Newman says. “I learned early on that fresh was better than not.”

Newman’s “fresh is best” mantra translates well in today’s “buy local, serve fresh” restaurant business, as evidenced by the fact that Sea Grass Grille has been an island favorite for 11 years.

“We use the freshest possible that we can get, preferably locally grown,” says Newman, who has worked with his business partner Kathy Jannot for 28 years, the first 17 at Charlie’s L'etoile Verte in the same location that Sea Grass Grille is in now. “When we buy tomatoes, we deal with a person, and all we buy from her are tomatoes. She has the best tomatoes around.”

Newman graduated from The Culinary Institute in Hyde Park, New York, in 1975. Cooking, he says, was something he could always do despite his learning disability.

“I have dyslexia,” says the 60-year-old. He was diagnosed by a teacher his parents hired when they lived in Savannah back in 1964. “She tested me and said, ‘It’s simple. There’s nothing wrong with him, he just has a learning disability.’ She told them whatever I excelled at, give to me. I was always in the kitchen with both my grandmothers, so that was a no-brainer.”

After narrowly graduating from high school in Savannah, he aced culinary school in New York.

“I graduated with honors,” he says, the pride still in his voice. “I catch on quick.”

He eventually made it from New York to Hilton Head by way of Charleston, where he worked for friend and restaurateur Robert Dickson and later had his own place, Chad’s, which he sold in 1988.

He prefers simple dishes, and still makes his Bluffton oyster stew the way his father taught him to do it, using just milk, cream, butter, black pepper and steamed oysters.

“I care about food, I care about the people that are eating my food,” he says. “I wouldn’t call myself a great chef. But like an artist likes to see a painting hanging on someone’s wall, I like to see people’s smiles when I see people eat my food.”

Newman is single with no children, but anyone who has called for reservations at Sea Grass has probably spoken with his mother, who lives on the island and fields the phone calls for her son’s restaurant.

“I’ve been in the professional kitchen for 42 years, and 28 of them have been in the same building that we are in right now,” he says. “I enjoy going to work every day.”