Jim Daniel, a local resident with years of business experience, has joined the Meals on Wheels, Bluffton-Hilton Head agency’s board of directors. Daniel and his family have been Hilton Head Island property owners for 20 years, part-time 12 years and full-time the last eight years. Originally from Connecticut, Daniel and his wife are parents of three adult children and nine grandchildren.

Mary L. Olodun, N.D., was named new president at the Hilton Head-Bluffton Holistic Chamber of Commerce. Olodun retired as a disabled veteran with 30 years of service. She received her nursing license in 1991. HCC is an international organization which serves as a bridge to bringing consumers RAY DANIEL DEFORD together with holistic and eco-friendly options, a news release said.

Vanessa Capehart was named membership account executive with the Hilton Head Island-Bluffton Chamber of Commerce. Originally from Alexandria, Va., she is a graduate of Radford University.

7. THE SEABROOK OF HILTON HEAD NAMES ACTIVITIES DIRECTOR AT THE FRASER HEALTH CENTER

The Seabrook of Hilton Head named Sammie Jo Manning activities director at The Fraser Health Center. Manning earned her B.A. degree in psychology with a minor in theater from Stetson University. The Fraser is a licensed and Medicare-certified skilled nursing and rehabilitation center.

Jennifer McEwen, who since 2017 was Hilton Head’s director of Cultural Affairs, has joined the United Arts Council of Raleigh and Wake County in North Carolina as its president and CEO. The Town of Hilton Head said McEwen developed and enacted strategies that used arts to expand the creative economy.

James Simmons, M.D., has joined Jamison Express Care in Port Royal. Dr. Simmons has more than 25 years of experience. He received his medical degree from the University of Pittsburgh School of Medicine.

Bob Bromage has joined Town of Hilton Head Island as Director of Public Safety. In this newly created role, Bromage will lead development and implementation of town-wide public safety initiatives. Most recently, he served as the public information officer and lead cold case investigator for the Beaufort County Sheriff’s Office. 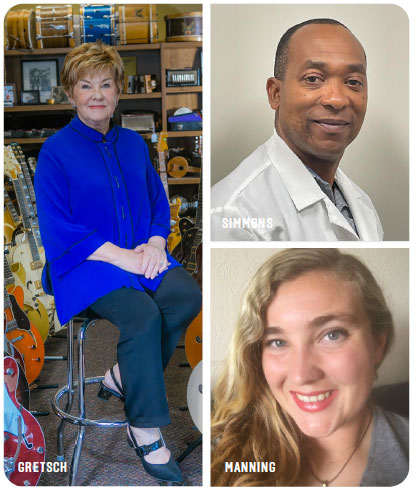 12. NAMM FOUNDATION WELCOMES BOARD OF DIRECTOR

Dinah Gretsch was named to the NAMM Foundation board of directors in the role of vice chair. Gretsch is executive vice president and CFO of the Savannah-based Gretsch Company, which has a drum factory in Ridgeland, S.C.