1. THE GREENERY WELCOMES NEW BRANCH MANAGER
Gary Ostroski has been named The Greenery’s branch manager at the Hilton Head Island Commercial branch. Ostroski will be responsible for the success of the Hilton Head Island Commercial business unit including business development, account management, people development and operational excellence. Ostroski has a Bachelor of Science in marketing from York College (Pa.) and an MBA from UMass-Amherst.

2. PROBATE JUDGE KENNETH FULP PLANS TO RETIRE
Beaufort County Probate Judge Kenneth Fulp announced he will retire at the end of his current term of office on Dec. 31, 2022. Judge Fulp has served as Beaufort County’s Probate Judge since 2012, first by gubernatorial appointment and then by election in 2014 and 2018. Prior to becoming probate judge, he had served as associate probate judge since January 1999.

3. LAW FIRM HIRES NEW ASSOCIATE
John Logan Mallett has joined the law firm of Jones, Simpson & Newton, P.A. as an associate. Mallet is a 2018 graduate of Clemson University and a 2021 graduate of the University of South Carolina School of Law.

4. UNITED WAY OF THE LOWCOUNTRY NAMES COMMUNICATIONS DIRECTOR
Wendy Eden Jones has been promoted to director of marketing and communications at the United Way of the Lowcountry. Jones will focus on strategic messaging, public relations, marketing and design, digital marketing and storytelling. Her promotion comes after joining the organization as a philanthropy specialist in 2019.

6. HHSO AND MUSIC DIRECTOR AGREE TO CONTRACT EXTENSION
The Hilton Head Symphony Orchestra and its music director, John Morris Russell, agreed to a three-year contract extension. Russell’s role with the HHSO will continue through the 2024-2025 concert season, HHSO said. Russell was named music director in 2012. During his tenure he has worked to expand the HHSO’s reach off Hilton Head Island and has spearheaded numerous new programs with Beaufort County Schools, including the Music Bridges program.

7. CHARLES SCHWAB WELCOMES FINANCIAL CONSULTANT
Hampton Long has joined the Charles Schwab office in Bluffton as a financial consultant. He will provide wealth management and investment help and guidance to Schwab clients through financial planning discussions and personalized portfolio consultations. Prior to joining Schwab, Long spent 12 years in the financial services industry, most recently as a financial advisor and consultant at Bank of America/Merrill Lynch. 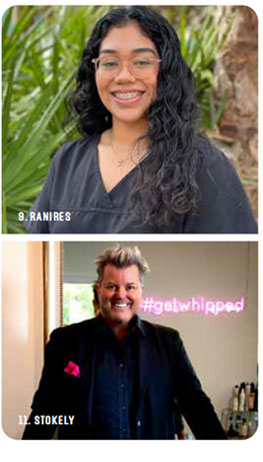 10. THE SEABROOK OF HILTON HEAD NAMES NEW EXECUTIVE DIRECTOR
Chris Romick has been named the new executive director of The Seabrook of Hilton Head. Romick brings more than 24 years of experience in the senior living industry. He is a licensed nursing home administrator and has previously held the roles of marketing director, regional director and executive director.

11. SALON OPENS ON HILTON HEAD ISLAND
Whip Salon recently opened on Hilton Head Island in the Circle Building off of Sea Pines Circle. The salon caters to women and men and has been around for more than five years with three locations across Fairfield County, Conn. Celebrity hair stylist Dennis Stokely has joined the salon. He’s worked with many celebrities, including Paula Abdul.