Marcus Tanner has been appointed as new executive director at Second Helpings.

A native of northwest Tennessee, Tanner had a 27-year career in the Marine Corps. He has been stationed throughout the U.S. and has been deployed to Iraq, Afghanistan and other countries in Africa and the Mediterranean. He retired from the military in October.

Tanner succeeds Lili Coleman, who is retiring after leading the organization for four years. About 300 volunteers deliver approximately three million pounds of food annually to 50 agencies in Beaufort, Jasper, and Hampton counties.

“Having the chance to be a part of the Town’s master planning of the Mid-Island, Chaplin, and Crossings Park creates multiple opportunities in our community for unique recreation programs,” Soule said.

Bluffton Town Manager Stephen Steese appointed Chris Forster and Heather Colin as assistant town managers. Forster, the former director of finance and administration, will continue to lead the finance and administration department and oversee the Don Ryan Center for Innovation. Prior to joining the Town of Bluffton in November 2019, he worked on government consolidation and shared services efforts for the state of Oklahoma.

Colin, who was formerly the director of growth management, will focus on the town’s planning and projects. She will continue to oversee the engineering department. Prior to joining the Town in 2016, she was the development review administrator for the Town of Hilton Head Island.

Janet “Jan” Smith has been named senior director of development at the Arts Center of Coastal Carolina. Smith has had a career in non-profit management and development. She’s been executive director of The Children’s Center and she worked with the international organization Save the Children, facilitating children’s humanitarian projects for the border immigration crisis. Most recently, Smith was development director at Memory Matters.

Kate Riotto Noe has started a Bluffton-based travel agency through Dream Vacations. Noe graduated from the University of South Carolina Beaufort with a degree in hospitality management. She completed the CTA (Certified Travel Associate) certification from The Travel Institute. Noe has more than 10 years of experience in the travel industry.

Patrick O’Keefe has been named the new director of tennis at The Sea Pines resort. He is replacing Job de Boer who retired in June after 30 years. O’Keefe previously served as director of tennis at Hidden Valley Country Club in Salem, Va., and as a coach at the Smith Stearns Tennis Academy. He holds a degree in business and marketing from Radford University (Virginia). In his new role, O’Keefe will be responsible for overseeing all tennis operations, including lessons, clinics, tournaments, and camps.

Cindi Armacost is a professional interior designer with a degree in interior design. She has more than 30 years of experience.  In her new role at StoneWorks, she will work with builders, designers, architects and their customers on new construction projects and remodels.

Sydney Egnor joins the team as a sales consultant and will work with new retail clients. Previously, Egnor worked for five years as a new car-ordering specialist for BMW.

After more than 20 years on Hilton Head Island, ROC Dental Group has opened a Bluffton office in The Plaza at Belfair, adjacent to Belfair Towne Village. Expanding to Bluffton allows the private practice to fulfill its mission to serve more of its neighbors while supporting local nonprofits that promote wellness. 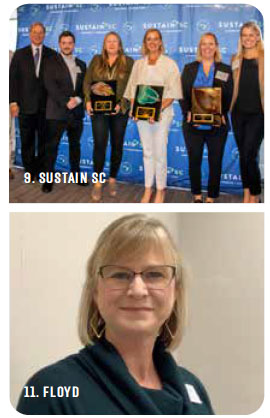 Sustain SC recognized Boeing, the S.C. Ports Authority and Volvo Cars with the inaugural Excellence in Mitigation award, which honors their efforts to bring economic development to the state while maintaining a positive conservation impact, a news release said. The three honorees developed innovative projects with successful mitigation components.

Stacy Floyd has joined Memory Matters as its new development director. She will lead efforts in donor cultivation, grant management, and fundraising. Recently, she was the executive director at Palmettos Assisted Living. Previously, Floyd was the memory care coordinator at NHC Healthcare and the Development Director for the Alzheimer’s Association.