Ashley Solano and Jessica Palmer have joined Lowcountry Paver. Solano has several years of customer service experience in the restaurant industry and is also bilingual. Palmer is a former admissions director, bringing an administrative skillset to the company. Lowcountry Paver has also welcomed back a previous employee, Brandie Purvis, who took several months off due to the pandemic.

Liz Gillespie and Michelle Licona have joined Berkshire Hathaway HomeServices Hilton Head Bluffton Realty. Gillespie moved to the Lowcountry from California and started out as a design consultant before going into sales full time. She has represented clients throughout Hilton Head and Bluffton. Licona, originally from New Jersey, relocated to the Lowcountry in 2002. She quickly established roots in the real estate community, most recently as owner of an Italian restaurant in Bluffton.

JoJo Woodward and Michelle Fraser will lead the Lowcountry Human Trafficking Task Force, which encompasses Beaufort, Jasper, Colleton, Hampton and Allendale counties. Woodward has more than 30 years of law enforcement experience. He is a member of the Solicitor’s Office Career Criminal Unit. Fraser oversees the day-to-day operation of the 14th Circuit Victims Services Center and its community partners. She has been a Solicitor’s Office victim advocate for more than 15 years and is a Marine Corps veteran.

GoKart Hilton Head, a new outdoor, family-friendly attraction, is set to debut in July. Located at the re-branded Adventure Hilton Head at Broad Creek Marina, the double and single carts are equipped with advanced safety features for drivers age 8 and above. The doubles will let children approximately age 3 and above join the driver, a news release said. The company’s zipline course is set to re-open in June.

Justin Pierce has joined Mikkelson Law Firm. He will serve as an attorney focusing on real estate closings. Pierce received his juris doctor from the University of Denver Sturm College of Law and his bachelor of science degree from Clarkson University.

Coastal Installations was named the Southeast Regional Dealer of the Year by 3M. The company has installed 3M Window Film in South Carolina and Georgia for more than 22 years since opening on Hilton Head Island.

Jason Grunkemeyer and J.W. Wilkerson have joined Hilton Head Christian Academy’s athletic department. Grunkemeyer joins the school as director of student-athlete and coach development and head coach for varsity boys basketball. He served as associate head men’s basketball coach at Ball State University for the past eight seasons. Wilkerson, a Bluffton native, will be the Eagles’ varsity baseball coach and physical education mentor. Over the last seven years, he helped build the baseball program at Southwest Florida Christian Academy.

A new memory care unit has opened at Sprenger Health Care Bluffton and Sprenger Health Care Port Royal. The Willows Memory Care Unit focuses on quality care for those in all stages of Alzheimer’s, dementia or related diseases. The Willows features a Music and Memory program designed to awaken the brain through music to help patients with dementia. 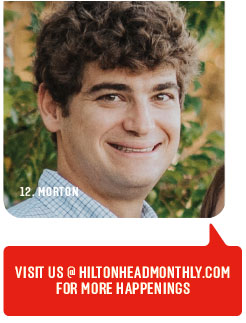 AJ Morton has joined Coastal Care Partners / My Nurse Now as the director of sales and marketing. Morton earned degrees in respiratory therapy and exercise science from Georgia Southern University.