1. HOSPICE CARE OF THE LOWCOUNTRY NAMES DIRECTOR OF DEVELOPMENT

James Dismond has been named director of development at Hospice Care of the Lowcountry. Originally from Tompkinsville, Ky., he attended Berea College and Marshall University.

The Greenery has promoted Stuart Grant to branch manager for its Palmetto Bluff operations. Grant has worked for The Greenery, Inc. since 2003, with roles including account manager, operations manager, and business developer. He graduated from Spartanburg Tech with a degree in horticulture in 1997 and graduated from Clemson University with a major in resource management and a minor in horticulture.

During a 30-year career, Ken Thomas, The Greenery’s new vice president of operations, has owned and operated three landscape companies, including Scapes Group in Atlanta.

He is a longstanding member of NALP/ACLA and past president of the Metro Atlanta Landscape and Turf Association.

Libby Benedict and Vinita Mahajan have joined Horizon Rehabilitation & Sports Medicine. Benedict is the new director of marketing. She has a background in marketing, human resources management, fitness, and sales.

Mahajan has been hired as a licensed occupational therapist and certified hand therapist. She’s worked with hand, neuro, and plastic surgeons for more than 15 years.

Dr. Stephen Fedec has joined Beaufort Memorial Heart Specialists in Bluffton and Beaufort. Dr. Fedec brings more than three decades of experience, and is board-certified in internal medicine, cardiology and interventional cardiology. His office will be in the hospital’s new Okatie Medical Pavilion. 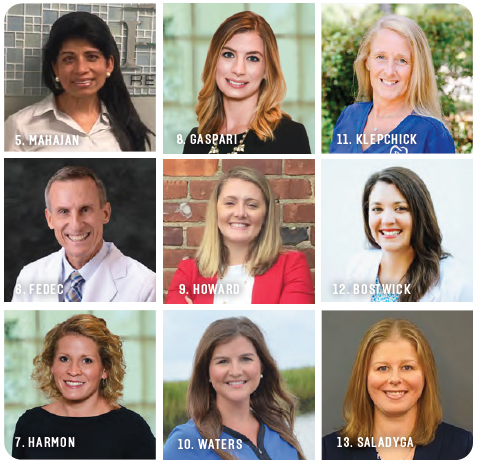 Gaspari earned her medical degree at Sidney Kimmel Medical College in Philadelphia, Pa. She completed her residency in Obstetrics and Gynecology at Lankenau Medical Center in Wynnewood, Pa.

Kaziah S. Howard has joined Bluffton-based SmartMarketing Communications as its creative director. Howard previously served as the director of marketing and brand strategy for the South Carolina Chamber of Commerce. As creative director, she will serve as project manager on all marketing, design, advertising, and branding projects for clients.

Victoria Waters has joined Coastal Care Partners as a nurse care manager. Waters has experience as an emergency room nurse and has worked with some of the best nurses and doctors in the Savannah area.

Caroline Klepchick has joined ROC Dental Group as a patient care coordinator. Klepchick has worked in healthcare in the Lowcountry for more than 15 years.

Amelia Bostwick, MD, and Kristen Snipes, MD, both OB/GYNs, have joined Memorial Health University Physicians. Bostwick will provide safe, high-quality obstetrics and gynecology care for women in the Savannah area. Snipes, MD, will bring personalized care for women of all ages in the Bluffton area.

Anne Saladyga, MD, a board-certified general surgeon who is fellowship training in breast surgical oncology, has joined its Memorial Health University Physicians breast care practice. Dr. Saladyga is an expert in providing evaluation and treatment of breast disease in women and men of any age, a news release said.