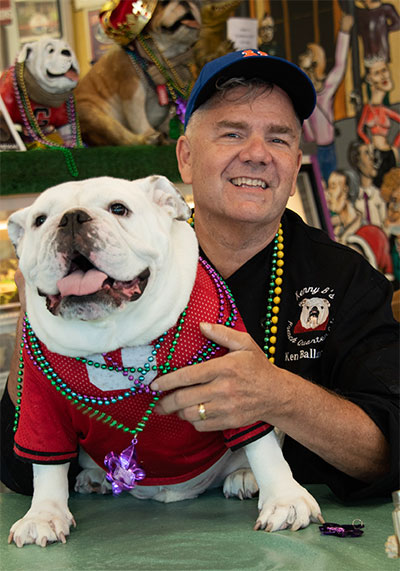 It may be Ken Ballard’s name on the door, but don’t try to tell his bulldog, Beignet Bouchee that Kenny B is the leading man at the restaurant. “We picked him up from New Orleans back in 2017,” said Ballard. “People ask me why I love Georgia football so much, it’s because I love the dog.”

That love makes sense – it was the first bulldog, Bubba Gumbeaux that put Kenny B’s on the map, establishing it as the island’s go to for kicked-up Louisiana fare. This kicked off a string of bulldog mascots for the restaurant, inspired by a class Ballard attended taught by guest lectuer, legendary ad man Joe Sedelmaier.

“He said to do something off the wall that folks will remember,” said Ballard. “Thus, the dog. We took it and ran with it.”

But it’s not all just marketing for Ballard and his dogs. “I always feel they are all still watching from above, knowing that someday they will be waiting for me again.”