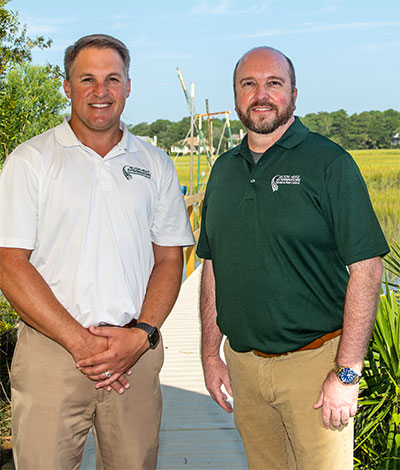 Throughout the modern history of Hilton Head Island, we’ve witnessed plenty of changes. The small, sleepy resort town at the edge of the map has blossomed into a fully-fledged hometown with a thriving sense of community and a booming population.

There have been plenty of changes, but there has been one constant: Hilton Head Exterminators.

“We were there from the beginning. They were building Sea Pines and the only termite company in the area was in Charleston,” said John Harris, who runs Hilton Head Exterminators’ Bluffton operations. “We did pre-construction soil treatment for the development of Hilton Head Island, and it just grew and grew and grew.”

From those early days, the company expanded to the premiere brand across the Lowcountry for eliminating anything that crawls, bites or stings. And leading the way are Harris and Brian DeChirico, who runs the show on Hilton Head Island.

“This company has such a great history in the Lowcountry, and we’re just trying to continue that momentum and improve upon it,” said DeChirico. Improving on it means working towards impeccable customer service and accepting nothing less. “That’s the core tenet of what we do. Without customers, we have nothing. We’re a service company. Killing bugs is just part of it.”

A native of the Lowcountry, DeChirico was most recently in sales for BASF before coming to Hilton Head Exterminators in 2019. His previous career has seen him move three times in 14 years, which became less desirable as his young children began to grow. The time was right for a homecoming, and with the relationship and mutual respect he’d built with the company through his dealings with them at BASF, it was a natural fit.

Across the bridge in Bluffton, Harris has deftly handled mainland operations as the latest chapter in his lengthy career with Hilton Head Exterminators. Initially working in sales, he was named manager of the Bluffton office in 2008 and has overseen its steady growth ever since.

“We have grown out here to really immerse ourselves in the community, by establishing great relationships with the Hilton Head Area Homebuilders Association and the Hilton Head Island-Bluffton Chamber of Commerce,” said Harris. “In fact, one of our employees, Jake Rountree, has become an ambassador for the Chamber. It’s really expanded our relationship with Bluffton.”

Fostering that sense of community is a huge part of what Harris enjoys about his job. “I have customers who go all the way back with us to the 60s and 70s. That part has been fun,” he said. “I hope that I have helped to keep that going and still be part of it as we get larger.”

Whether on Hilton Head Island or in Bluffton, Hilton Head Exterminators’ leading men are continuing a legacy of quality care that stretches back to the foundations of the Lowcountry’s modern day.