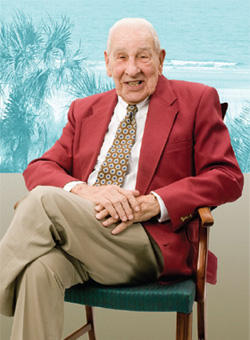 What does he love most about the island? “It’s the people who are here. You meet so many interesting people with interesting backgrounds,” he said, unaware that he is one of those of individuals.

When he arrived on the island there was no formal government. Whenever something threatened the nature of the island, citizens naturally banded together to challenge it, and Racusin was always one of them. He was president of the island’s community association when the swing bridge was damaged and unworkable. In many ways, it was tough to get things moving again because the Army Corps of Engineers was used to working with a town’s government, and none existed on the island.

That planted the seed in Racusin. He called the political science department at Clemson University and requested assistance to form some type of governing body. Beaufort County officials were reportedly not too excited about the proposition for the great fear of losing tax revenue in the growing island community.

According to Racusin, in 1979, the chamber of commerce pitched in and also became committed to the cause of town incorporation. In 1983, with all the required paperwork in place, the Town of Hilton Head Island was formed, elections were held, and Racusin became mayor.

When asked about his proudest accomplishment as the island’s first mayor, he cited the building blocks put in place for town growth. He remembered 14- and 16-hour workdays alongside colleagues, getting the hard work done to assure the success of the town’s incorporation.

Racusin fondly recalled moments when Charles Fraser said, “Ben and I put this together,” about one project or another on the island. Fraser would undoubtedly be proud of the town’s 25-year milestone and certainly proud of the man who helped make it happen.