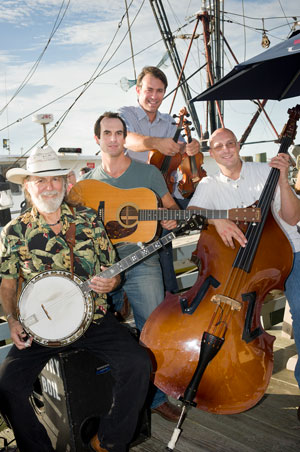 On a seasonally perfect October evening, the four fast-fingered musicians played for a crowd of a couple hundred people around the Neptune statue in Shelter Cove. The mix of timeless classics and favorite originals appealed to a diverse audience, most of which had never heard of the band.

The covers and humor, with the serious musicianship Jevon Daly, Mike Daly, Andy Pitts and Gary Pratt share when they’re playing together, make the band one of the most flexible, family-friendly bands in the area.

“No one will ever quit Lowcountry Boil,” says guitar player Pitts. “It’s our baby. We’ve had this thing. We’ve cared for it and nurtured it.”

“It rounds out my musical personality, gives me legitimacy as a musician,” he said.

That feeling is carried through all the members, who use Lowcountry Boil as an opportunity to expand their skills and try techniques they might not have the chance to otherwise.

“I love the band and I think our band is the best band on the island,” banjo player Mike Daly says.  “The level of musicianship; It’s so serious and nothing’s ever taken for granted… I take great pride in it as I think any tradesman or craftsman who worked on their trade for many years would. The pride is fueled by this sort of inter-competition. You don’t want to drop the ball when it’s in motion.”

Unlike most bands, the members of Lowcountry Boil don’t go into a performance with a set list. Instead, the songs the band plays are decided by a combination of audience favorites and band members’ preferences.

“Right now, someone will come in and say, ‘I want to play this song,’ and we’ll say, ‘Let’s just try it right now,’ and we’ll play it for six months or a year or three years and it will be really good or we’ll never play it again,” fiddle player Jevon Daly says.

Jevon says the biggest change for him in the past 12 years he’s been with Lowcountry Boil is his children. If it weren’t for Pierce, Brianna and Kassidy, Jevon says he doesn’t think he’d be playing as much.

Even with the ebb and flow that comes with any local music scene and band, Jevon says Lowcountry Boil has gotten by on its talent.

“I think bands start out trying to write songs for the audience, and I think subconsciously you try to start to entertain the band,” he says. “When you’re playing that fast, you’re not thinking about performing. You’re not thinking about the performance. In Silicone Sister, it’s overt performing…You put the lipstick on, you become a performer. In Lowcountry Boil, it’s almost like why do we have to perform if what we’re doing is so musical?”

During breaks, the audience will hear stories of trips to festivals, but overall, the concert is about the three-part harmonies and respect the members have for each other.

While the band has a go-to list of songs that work for them, the long list of musicians- including both of Jevon’s brothers- who have played for a few years in the band have added specific styles, influences and songs that might not work with its current membership. The band really does change every time someone leaves or a new person comes in.

“Everybody understands that these kinds of bands don’t come along all the time,” Jevon says. “A lot of times when I’m playing, you can get a substitute…I think in Lowcountry Boil, we don’t ever sub people out. It’s impossible because the repertoire is built on things we like, not a standard.”