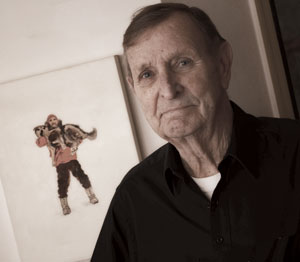 Jorgensen, who spent three years in the U.S. Navy prior to college, had not yet made up his mind about which of the earth sciences he would pursue. He filled his class schedule with such courses as geology, climatology, meteorology, geomorphology and cartography.

“I was a weatherman in the Navy and enjoyed what I did. I thought this would be another interesting opportunity,” he said. The next thing he knew he was accepted to work as a meteorological aide at the South Pole, making scientific history.

The IGY involved more than 50 nations in discovering and sharing scientific information resulting from expeditions all over the planet, including 12 expeditions that covered Antarctica, often described as the highest, driest, windiest continent on the planet.

“It was an 18-month year set aside for any country that wanted to study the earth’s surface – Antarctica, the middle of the oceans, islands, jungles,” said Jorgensen.

Expedition after expedition made its way to the South Pole, while weather permitted, from November to January 1957-58.

Heading one expedition was New Zealander Sir Edmund Hillary, famed for being the first to conquer Mount Everest with his Nepalese Sherpa Tenzing Norgay. Heading another was Sir Vivian Fuchs, whose team completed the first overland crossing of Antarctica in 1958. Greeting the explorers at the pole was U.S. Navy Rear Admiral George Dufek, whose responsibility it had been to prepare the site for those who would winter over in extreme isolation. Once the last plane left the South Pole in late January, the 18 individuals remaining behind would fend for themselves with what supplies were provided until planes began trickling in the next November.

Southern hemisphere seasons are opposite from northern ones, with spring and summer running from late September to late February with nearly 24-hour daylight during much of that period on Antarctica. By the time the last plane flew away, the sun would begin to set for a long, dark winter from March to August.

Jorgensen and his colleagues headed to Antarctica in September of what would have been his senior year of college. They all cleared physical exams, mental hurdles posed by psychiatric and psychoanalytical tests and orientation at U.S. Navy Construction Battalion base at Davisville, R.I.

“At Davisville, we were issued long waffle cotton underwear, wool shirts and trousers, socks and boot liners, vests, outer parkas, leggings, gloves, and footwear,” he said. His favorite piece of clothing was a thick red vest that he wore daily, earning him the nickname “Red Jacket.”

The clothing was developed by the U.S. Army’s Cold Region Laboratories as well as private companies. Since few people had ever spent as long a time in such extreme conditions as the scientists would, they were issued some duplicate items, such as three kinds of footwear. These included the Army’s over-sized white combat boots, commercial rubber inflatable thermal boots and Eskimo-style mukluks with felt liners, which Jorgensen preferred.

The 10 civilians finally began their journey to the South Pole. They would be joined by eight U.S. Navy sailors whose job it would be to keep the station running.

“It took days to get there. We weren’t on jet planes,” he said. The route took the scientists from Anacostia Naval Air Station in Washington, D.C., to overnight stops in San Francisco and Honolulu and refueling stops on Kanton Island and beautiful Fiji. They finally arrived at Christchurch, New Zealand, where scientists, U.S. Navy sailors and supplies waited for flights to Antarctica.

The flights took more than five days. It would be another five to six weeks before the group boarded a ski-equipped plane to the runway on the Ross Ice Shelf. A few days after landing in McMurdo, they then flew to the South Pole in a Navy P2-V over Beardmore Glacier, the world’s largest.

Well-stocked with food, recreational items, fuel and equipment as well as scientific materials, the 18 men worked nearly underground as winter snow covered the tunnel-connected buildings that housed the galley, lavatory, weather shack, dining area, and dorms. The meteorologists were frequently outside taking readings and everyone worked in six-man shifts to maintain the buildings and harvest snow for water.

“We scientists did a lot of work and recorded our data, but I want to say that I give those sailors a lot of credit,” Jorgensen said. “Those guys kept us alive. We had an electrician there, a mechanic, the cook, the doctor. We all worked hard together. But their mission while we were down there was to keep us alive and they did.”

Jorgensen said he found nothing particularly difficult about being at the South Pole until the end of his assignment.

“Toward the end when you saw people leaving ahead of you, you started getting anxious,” he said. “When we finally left, it was a big reality check when we got to Christchurch.”

He said he was quite the sight to see but did not get really “cleaned up” until he arrived in San Francisco, where he and a colleague were hustled by a hotel clerk into their rooms upstairs “so we did not disturb the guests” by their long-haired, well-worn appearance.

Jorgensen went on to finish his degree, going into business but somewhat regretting that he did not remain in meteorology. Several years later, after moving to Atlanta and sailing his boat from Barnegat Light, N.J., to berth at Hilton Head Island, he ran fishing charters for several years before retiring.

Not a day goes by that he does not think of his time on “the Ice.”

“I was on the most beautiful spot in the world, in my mind. You look up at night and see all those stars in the nighttime, the Southern Lights, diamond dust, all the rainbows,” Jorgensen said. “It made me realize how insignificant I was. I could never take myself seriously after that.”

Gwyneth J. Saunders is also an Antarctic veteran and notes that while travel nearly 35 years later to Christchurch and the Ice took much less time, the wonder and adventure of being there has not changed. It is still a most alluring and dangerous continent.