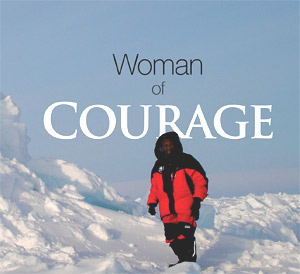 Barbara Hillary walks with a slight limp and reluctantly carries a cane – a stress fracture from training for her latest, top-secret adventure.

“Let’s just say I’ll be setting another world record,” the 76-year-old lung cancer survivor said with a smile, adding that her next “vacation” will take place in a dangerous, remote area.

It’s difficult to imagine anything can top Hillary’s last expedition – a three-week trek to the North Pole that required months of preparation. Hillary had to be in prime physical condition to endure the arctic elements – including 40-below temperatures and the constantly shifting ice – while skiing a majority of the way and carrying heavy supplies. The retired nurse also had to raise more than $22,000 for the trip by soliciting companies and appealing to the public.

“I heard it all,” Hillary said. “People said, ‘You’re doing to freeze to death up there.’ ‘You’re too old.’ And my favorite, ‘The polar bears are going to eat you alive.’”

Hillary took it all in stride, and eventually became one of the oldest people to reach the North Pole. She’s also believed to be the first black woman to tackle the feat. Since her memorable trip last spring, Hillary has toured the country, speaking to the public about how to achieve their “North Pole dreams.” Earlier this summer, she received the National Organization of Women’s “Woman of Courage.” Hillary most recently spoke to a crowd of more than 50 at the University of South Carolina Beaufort’s Bluffton campus.

“The process of preparing for the North Pole was a heaven and a hell,” Hillary said. “I didn’t have any money – not two nickels to rub together.” 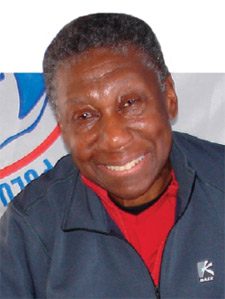 To prepare for the rigorous travel, Hillary trained for six to nine months – even pulled a tire tied to a waist harness up and down the street of Queens. But first, she had to learn how to ski.

“It wasn’t a popular sport in Harlem,” Hillary said, laughing.

Hillary grew up in Harlem and spent her summers on Hilton Head Island. She devoted herself to a nursing career and community activism. At 67, she lost part of a lung to cancer.

“Having lung cancer does not have to be as debilitating as it’s made out to be,” Hillary said.

Undeterred, Hillary set her goals high. She went dog sledding in Quebec and photographed polar bears in Manitoba. As she researched arctic explorers, she noticed that there was no record of a black woman reaching the North Pole. Hillary dedicated her accomplishment to her mother-who taught her how to achieve her dreams.

“…I’m not a little old lady but an older Northern explorer,” Hillary said. “… To be old is not to be mindless, useless and sexless. To be old is to be in control.”