On the cusp of graduating from high school, Sidney Wilson is at an age typically marked by a desire to fit in — to conform. But that’s not Sidney. She’s embraced what makes her different and has written a children’s book encouraging others to do the same.

Part of what makes the Hilton Head Island High School senior special is that she was born with Cardiofaciocutaneous (CFC) syndrome. It’s an exceedingly rare genetic disorder that can affect the heart, skin and face; cause developmental delays and impair intellectual development. There are only an estimated 400 CFC cases worldwide. The rarity of the syndrome can make it very difficult to diagnose, a fact the Wilson family understands all too well as it took 14 years to get Sidney properly diagnosed.

“From 6 months old, we started to notice that something was off,” said Sidney’s dad, Brad. “From that point on, it’s been a moving target. Mom’s the one who buckled down and spent years trying to figure out what it was.” 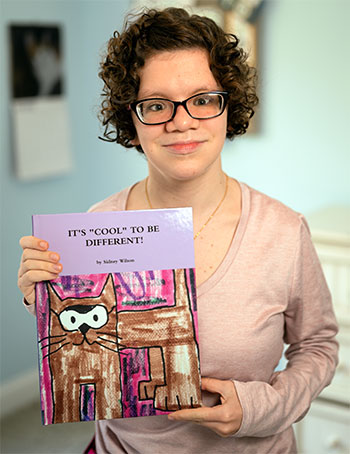 CFC is undeniably a factor in Sidney’s life, but it is far from what defines her. Initially a little shy, she is warm and friendly. When Tanner and Carley, Sidney’s older siblings, are together with her, the bond shared between them is genuine and immediately apparent. And for all the affection, Sidney isn’t treated with kid gloves. She’s not spared from the good-natured ribbing that goes on between the close-knit family.

“That’s something I’ve gotten out of this little nerd — the sense of humor,” Tanner said with a smile, illustrating the point. “She and I share an identical sense of humor.”

The book, “It’s ‘Cool’ to be Different,” was the result of a school requirement that every student complete a personal project. Knowing Sidney’s love of books, a teacher suggested that she write a book for her project.

“I have always wanted to write a book, and I saw it as the perfect opportunity,” Sidney said.

Sidney’s love of cats made the choice of a cat as the main character a natural choice. Along with photos of cats that appear in the book, Sidney added her own illustrations.

“We wanted it to explain a little bit about people with special needs, that it’s not so bad being different,” added Sidney’s mom, Cathy Wilson. “The book kind of explains that she knows that she’s different, it doesn’t bother her, and people shouldn’t feel sorry for her. She does want to have friends, and it’s more interesting to have friends that are different from you. It encourages friendship with people that are different from you.”

Getting the book started was a little stressful, Sidney said. She worked through a lot of rough drafts as the storyline was shaped and finalized. Since its release, the book has gotten much more notice than the family ever expected.

To prepare for that future, Sidney is working every day in the school library. She’s also recently joined a Special Olympics kayak team. Though the challenges of CFC are real, Sidney’s future appears bright.