Alfredo Soliz followed his tennis dreams everywhere they took him, from his native Bolivia throughout South America and across the pond to Europe.

And when his dream reached its ceiling, he came to Hilton Head Island and started a new one.

For more than 30 years, Soliz has used the skills and lessons his own tennis journey instilled combined with his relentlessly positive attitude and energy to help top junior players reach even greater heights on the court than he did representing the Bolivian national team as a teenager — and it all started here on Hilton Head.

Soliz began playing tennis at the age of 7 and quickly developed a passion for the game. He  rose to become one of the top junior players in Bolivia, competing internationally. He made a run at a professional career but regularly ran into top European players in the early rounds of qualifiers and eventually tired of the grind, recognizing his future in the sport would not be as a player.

He poured himself into learning how to better teach the next generation of standout junior players and sought out the biggest names and brightest minds in the game to help him develop as an instructor.

One of the turning points in Soliz’s young coaching career came in 1988 at an International Tennis Federation conference in Paraguay, where he met noted instructor Richard Schonborn, who coached Steffi Graf and Boris Becker as juniors. Soliz knew that Schonborn and others like him were the key to becoming the coach he wanted to be. 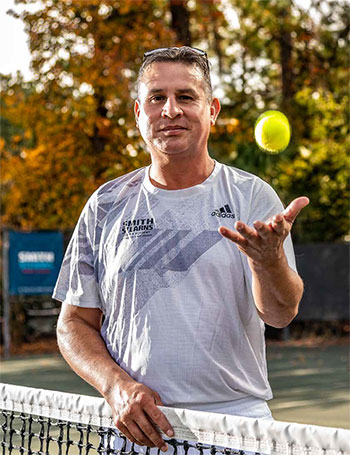 “If I didn’t play, I wanted to help others learn to play,” Soliz says. “I was passionate about the game, and I wanted to learn from the best.”

It was Schonborn who introduced Soliz to Nick Bollettieri, helping to launch a long career coaching top junior players. The Nick Bollettieri Academy boasted an alumni list that included household names such as Pete Sampras, Andre Agassi, Bjorn Borg, and Anna Kournikova, and Soliz was coaching the next generation of players who were on their heels.

After wrapping up his playing career in 1988, Soliz returned home to Bolivia and began coaching for a local club. A year later he came to Hilton Head to take part in Dennis and Pat Van Der Meer’s Tennis University, setting him on a new path.

“I said if I wanted to become a tennis pro, I had to learn from the best,” Soliz said of the Van Der Meers, who revolutionized how the game was taught through Tennis University and the Professional Tennis Registry.

After honing his skills and passion for coaching around the world, he returned for good in 2000, accepting a role at the Van Der Meers’ Professional Tennis Registry, which standardized the tennis instructor certification process and provides continuing education and resources to teaching pros. In the interim, Soliz sought out every opportunity to work with the biggest names in the sport, including a stint at the Bollettieri Tennis Academy in Florida, the precursor to the renowned IMG Academy.

He continued adding to the list of world-class coaches who helped mold him, first with the Van Der Meers, then at the Ivan Lendl International Junior Tennis Academy in 2011.

When the IJTA closed in 2015, Soliz became the academy coach at Smith-Stearns Tennis Academy, working with yet another legend of the game, Hilton Head’s own former world No. 1 Stan Smith.

“Every day I’m surprised I’m working next to this guy,” Soliz says. “He’s one of the legends, and I learn every day from him.”

Soliz knows all too well that most of his students will eventually hit the same ceiling he did at some point in their careers, whether that’s at the college level or in the professional ranks. He is focused on helping them maximize their potential and allow their passion for the sport to take them as far as possible.

“When these guys come and ask me how they’re playing,” he says with a smile, “I say, ‘You’re playing good! Someone else is just playing better.’”