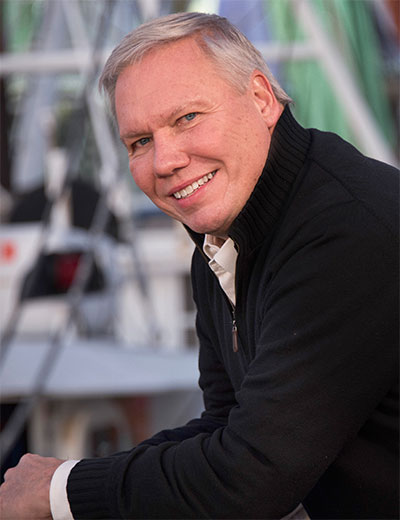 “I loved it from day one down here,” he said. “I really could tell that this was my calling.”

Having spent more than 30 years with the chamber, guiding it through periods of explosive growth not only on the island but in the areas around it, Miles is as much a part of the island as its beaches. There have been controversies and a handful of vocal critics, to be sure, but by and large his status as a fixture of the island simply seems to be a given.

“I don’t think a day goes by where I’m not writing emails,” he said. “It just doesn’t end. Even when I was a kid, I just like to work. As crazy as that sounds.”

That’s not to say he doesn’t take a day off. In between emails and meetings and Zoom calls, he’s been known to find a good stretch of beach to relax (if you press him to name a favorite, however, he’ll answer diplomatically that he loves all the island’s beaches).

He loves to bike, but hasn’t been on the bike since March as the chamber has dealt with the logistics of the pandemic. He boats occasionally, but admits his boat is “too small for a name.” His passion for Indiana University athletics runs deep as well. And when you get him in front of a Big Green Egg, prepare for some mouth-watering barbecue.

“I think it’s a great Saturday in the fall when you can have something on the Egg, football on TV and a sunny day on Hilton Head,” he said, describing his ideal day off.

But even in describing that day off, he’ll get right back to describing his passion for the chamber and what it does. He’s exceptionally proud of what the organization has accomplished, and with good reason. Beyond earning a five-star accreditation as one of the top chambers in the country, they developed a path forward at the start of the pandemic that became the model for organizations across the country.

“Those things are really big, and speak volumes about the team we have here,” he said.

He is, essentially, a guy who loves his job. It’s just a part of his strong midwestern work ethic, cultivated on the family farm where he would spend long hours working the fields before school and after basketball or baseball practice.

“The guy taking care of our livestock retired, so my dad decided to sell the livestock and plant some grain,” said Miles. “I told him, ‘Before you do that, give me a shot at it.’ So, I got two other buddies of mine and every morning before school I’d pick these guys up at about five in the morning, drive out there, feed all our livestock, do what needed to be done, come back and go to school.”

The next year, a flier from Marathon Oil (which, at the time, owned Shipyard) landed in the Miles’ mailbox and served as his first introduction to the island.

“I just happened to see it on our counter, read it, and told my mom and dad, ‘You know we gotta go do this.’ It was three or four nights for this unbelievable price… so we came down here for a few nights and loved it.”

The journey from tourist to resident brought him through the halls of Indiana University, then to jobs at chambers of commerce in Daytona, Florida and Raleigh, North Carolina.

“Once I got my eyes open to what a chamber of commerce did, I loved it from day one,” he said.

That love brought him back to Hilton Head Island, where he belonged.