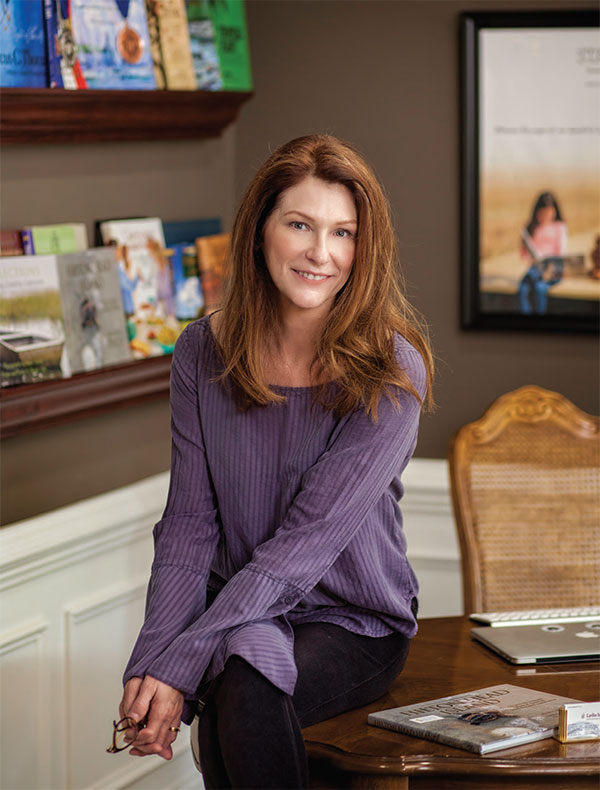 LYDIA INGLETT TURNS A LOVE OF LITERATURE INTO A LIFETIME IN PUBLISHING.

At the age of 14, Lydia Inglett convinced her skeptical parents to buy her a printing press, an early start to what would become a lifetime of publishing books.

“I moved that 600-pound machine around for years,” she said, her soft Upstate accent underscored by an English brogue.

As a child, illustrated classics like “The Jungle Book” and “The Adventures of Sherlock Holmes” ignited her imagination. By the time she was a teenager, she was thinking about how she could build a life around books. By the time she was a young adult, she was working a day job and then coming home to “print all night, all with the goal of creating beautiful things on paper,” she said.

Over the ensuing 40 years, the publishing industry and readers’ tastes have changed, but Inglett is still successfully producing art-quality coffee table books. At her modest operation, it’s about quality over quantity and creating something with meaning that lasts a lifetime; no digital e-book can compare. Lydia Inglett Publishing and its retail arm, Starbooks, excel at highlighting regional character – from a book featuring a series of Lowcountry landscapes captured by a local photographer to a collection of cherished recipes by a vibrant chef.

Inglett moved to Hilton Head Island in 2000 and started her company out of her house. She goes to great lengths to walk first-time authors through the lengthy publishing process, from draft to completion. That’s probably why her small operation wins a lot of industry awards, even in competitions against larger publishing houses.

On top of that, Starbooks has raised more than $500,000 for charities from those working to fight Alzheimer’s disease to Hilton Head’s Junior Jazz Foundation. The upcoming “The Power of the Paw” will compile crowd-sourced accounts of rescued dogs, written by their owners. The proceeds will go to animal rescue organizations.

Recently, Inglett has begun to integrate augmented reality into some books. Readers can use their smartphones to scan images in the book to see the photo come to life in a video.

“Kids’ eyes light up when they see it,” she said.

Inglett, who met her husband, Jolyon, in London, now splits her time between the U.K. and Hilton Head. She has an office in Shoreditch, sometimes referred to as the Silicon Valley of London.

“It’s great to have contrast, and we think we have the best of both worlds,” she said. “London is like the capital of the world; when I walk out of my office I ask myself, “What country would I like to eat in today?’ It’s energizing to be around a lot of innovation, but there’s nothing like coming back to the beautiful oasis of Hilton Head.”

When she’s in the Lowcountry, a typical Sunday at home involves watching the marsh in the morning while reading The Times of London, having friends over for brunch and strolling on the beach. Inglett also likes to paint, and is working on pieces for her next show, slated for late 2018. She draws inspiration from the Lowcountry scenes outside her door, where the Lowcountry sunset offers a stunning end to a picture-perfect day.

“We like to wind down back where we started — at the marsh, watching the ever-changing kaleidoscope of color,” she said. “This truly is an island where water and sky meet to make a masterpiece.”