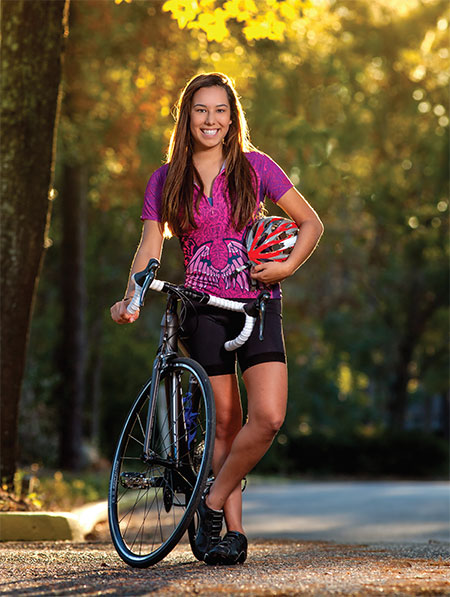 It is “definitely, without a doubt” from the 4,200-mile bike ride she took from Florence, Oregon, to Yorktown, Virginia, on the Trans-America Trail this summer.

Ever since the 18-year-old returned from her cross-country bike trip in August, Arnold hasn’t quite stayed in one place for too long. Shortly after her return, she cleaned out her closet and took one suitcase, one carry-on bag and her backpack to start school at Loyola University in Chicago.

Arnold is in class three days a week, and then she’s studying, babysitting or traveling for the weekend. With a big smile and a tall glass of sweet tea, she ticked off where she’s been in 2016: Mexico; Scottsdale, Arizona; Asheville, North Carolina; Salt Lake City; Moab, Utah; and Denver, for a total of 18 states. After she completes a year at Loyola, she plans to transfer to a school in Europe to major in international studies — and to travel more.

“After college, what I really want to do is buy a one-way ticket to a random country and explore the world,” Arnold said. “Pick up random jobs. Work on farms. Volunteer. Help people along the way. Just see where life takes me and be as adventurous as I possibly can with my backpack.”

Arnold grew up on Hilton Head Island, so it’s no surprise that she’s a natural on two wheels. Her dad taught her to ride a bike when she was 6 or 7.

“I always loved my bike. I’d clean it, ride to school and work in Coligny, and became known as the girl on the bike,” she said. “I love being outside in the fresh air.”

But Arnold took biking to a whole new level.

The ride on the Trans-America Trail was a year in the making. It started with talking to a friend about a special trip they’d take between junior and senior year. (Arnold ended up graduating a year early from Hilton Head High School, so it ended up being her senior year trip.) They thought Arnold could ride and her friend could follow in her car with supplies. But her friend’s mother said no.

Arnold’s parents were less than supportive of the trip as well, but she was confident.

Arnold bought the one-way ticket to Oregon: “This is happening, this is really happening … it’s really coming together. It felt so good,” she said. “I was determined. The second I decided on that, there was no way I wasn’t doing it.”

After stepping off the plane in Oregon in June, the next 70 days were filled with adventure, beautiful scenery, incredible people, and a lot of time spent thinking about the diversity of the U.S.

The last day of her ride, as she rode into Yorktown, Arnold said she couldn’t stop smiling.

“People would look at me from their cars and give me the weirdest looks because I was smiling just nonstop,” she said. “I did it. I proved all those people wrong who said I couldn’t do it. I finished, and more than alive.”