It’s reasonable to wonder how the co-owner of a successful dog-grooming business on Hilton Head Island found himself more than 5,000 miles from home helping animals in war-torn Ukraine.

As it turns out, the answer is remarkably simple. Jeff Prekop, who owns and manages the popular Groomingdales along with his wife, Jen, felt he was called to go there. So, he did.

It’s very likely that he’ll be returning before the end of the year.

“My inspiration was seeing what was happening over there,” Jeff said. “Seeing people fleeing with their animals, and seeing people fleeing without their animals. I was like, ‘Something needs to be done to help these people. Something needs to be done to help the animals.’ I’d come here after I’d just got done working out. All of a sudden this knowing just came over me. I said, ‘I’m going to go to Ukraine.’” 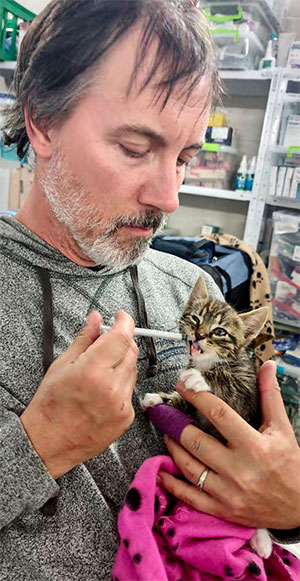 Jeff went home to find that the situation in Ukraine had been weighing heavily on Jen’s mind as well. Before she could finish her thought, he blurted out that he was going to Ukraine. Nonplussed, Jen simply said, “OK.”

Jen’s nonchalance likely stemmed from her somewhat unique background. She worked in Ukraine for a time during the fall of the Soviet Union. She knows the country and its people very well.

Making the decision to go was the easy part. Finding an organization that matched Jeff’s skill set and availability proved a little more challenging. He started his search just weeks after the Russian invasion of Ukraine. He found that many aid organizations were still staged at the border and hadn’t yet entered the country.

“I found a group in the U.K. that was transporting trucks full of supplies that they’d gathered in the U.K.,” Jeff said. “They were going through the Chunnel (Channel Tunnel) and checking at the border. Another group that was on the ground actually doing the work was taking them into Ukraine.”

It took a few weeks of back-and-forth emails.

before schedules could be coordinated with the U.K.-based relief agency. One Sunday night the agency called, and the schedules came together. Within 48 hours, Jeff was on his way.

“I was right in the center of the country,” Jeff said. “The Russians had just withdrawn from Kyiv.”

Arriving near the end of March, Jeff spent much of his time driving animal relief supplies from locations outside the country to a central camp in Ukraine. From there, they’d distribute the supplies to locations across the country, all while trying to keep a low profile.

Jeff is low key about the dangers he faced there, but they were present all the same.

“We were trying to stay under the radar,” said. “I didn’t think about it. My focus was on taking care of the animals.” 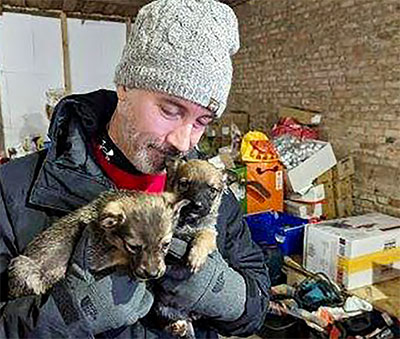 The first trip lasted two weeks. By the middle of June, Jeff was back for his second time.

He was working with the same agency, but a few things had changed in the intervening weeks. For starters the camp had moved, and Jeff said that conditions in the camp had improved dramatically.

“The first time we were there, it was very sparse,” he noted. “We had a camping toilet, and there was no heat, no running water. The second time was a much better scenario. It was a nice place. We had showers. We had water, all that kind of stuff.”

His second tour started with the construction of temporary animal shelters in the camp, and Jeff had the chance to be reunited with some of the dogs he had rescued on his first trip. During the second half of his trip, he was traveling to cities that had been shelled and were largely abandoned.

At times, the reverberations of shells exploding in the distance could be heard and felt.

Despite the challenges, Jeff is headed back to Ukraine.

“I’ll take at least two trips back before the end of the year,” he said.

A shared passion for animals has been central to their life.

Since purchasing Groomingdales in 2008, Jeff and Jen have donated a portion of their business profits to animal rescue causes, though their support of those causes goes back much further. Their involvement in animal rescue in Ukraine led to the creation of Rescue Paws International.

“Right after Jeff got back from his first trip, we started Rescue Paws International, a 501(c) (3) nonprofit,” Jen said. “We did that to make it more formal, but we’ve been giving our profits to charities for years. This has formalized it. We started it with the goal of doing rescues in war zones and areas of natural disasters. Right now, Ukraine is what’s going on.”

Donations can be made at rescuepawsinternational.com. One hundred percent of donations goes directly to supporting animal rescue operations in Ukraine.

This includes the cost of transporting food, fuel, equipment, vehicle repairs, medications, veterinary care and the transport and sheltering of animals.